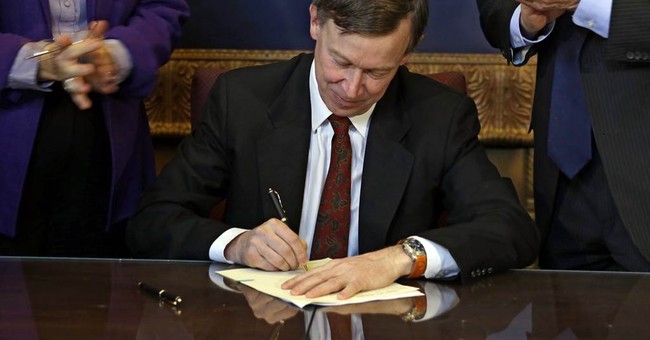 After much heated debate in the Democrat-controlled legislature, Colorado Gov. Hickenlooper signed sweeping new gun laws in March—exactly eight months after the mass shooting in Aurora. The bills failed to attract a single Republican vote, however, and GOP lawmakers warned Democrats that ‘voters would make Democrats pay’—and polls at the time seemed to suggest as much:

“Importantly, Colorado voters do not believe these sweeping gun control measures will make them any safer.  Two out three Coloradans (65%) say these new gun control laws won’t reduce crime or make the state any safer, while just a third say they will (32%).”

And there “very well could be political repercussions for supporting this legislation, as well.  Nearly half (48%) of voters say they would be less likely to vote for their State Senator in the next election if he or she supports these gun control bills (40% more likely).  There is strong intensity behind this as well – thirty-seven percent (37%) of voters overall say they would be much less likely to vote for him or her.”

Well, the time has come. Several Democratic lawmakers who played an influential role in helping pass the anti-gun laws are now the targets of recall efforts.  Via Fox News:

Morse, the Senate president, pushed a more far-reaching proposal that called for holding owners, sellers and makers of assault-type weapons liable for havoc inflicted by their guns.

He pulled the bill upon realizing he didn’t have enough votes. But his efforts have still drawn the ire of the groups.

The petition drives are being organized by the organizations Pueblo Freedom and Rights Group. They will need signatures from 25 percent of the vote in each lawmaker’s district to trigger a special election.

Hudak, remember, drew the ire of gun-rights advocates after she lectured rape survivor Amanda Collins (who had a concealed weapons permit but was not carrying due to her college’s gun-free zone policy) during one of the hearings about rape statistics. She told Collins that even if she had had a gun, it wouldn’t have helped her because “chances are” he would have been able to get the gun from her and possible use it against her. Katie reported on the full exchange here.

The deadline for signatures is May 21.

"We're going to damn sure deal with these politicians here, if not with the recalls then in 2014. ... This momentum will carry us into 2014 and beyond, this legislation in Colorado has been so overreaching," Dave Saleh, who is working on recall efforts for McLachlan, told ABC News. Morse, Hudak and McLachlan won their seats by a slim margin.