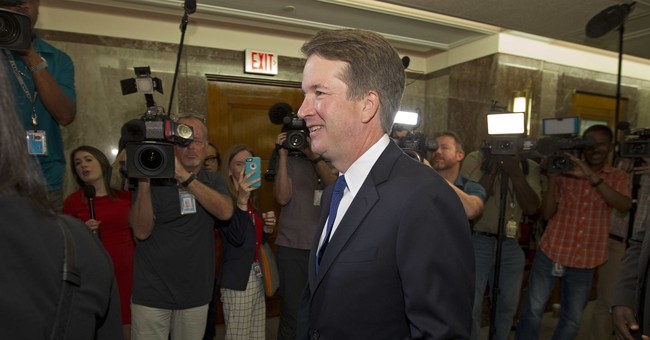 "Given the possibility of criminal wrongdoing by the President, doubts that Judge Kavanaugh believes a president can even be investigated, and the unprecedented lack of transparency regarding this nominee’s record, we should not move forward with hearings on September 4th," they wrote.

"The President’s personal lawyer Michael Cohen pleaded guilty to eight criminal counts and stated, under oath, that the President directed him to commit a federal crime by violating campaign finance law,” they emphasized. “This was done in the run-up to the election, with the intent of influencing the outcome.”

Cohen told the court Tuesday that he violated campaign finance laws in the arrangement of payments to Stormy Daniels and Karen McDougal, saying he’d violated federal law "in coordination with and at the direction of a federal candidate for office," in a reference to President Trump.

Sen. Grassley pushed back Friday on the Democrats’ complaints over the “lack of transparency” in relation to Kavanaugh’s record.

“Public material from Judge Brett Kavanaugh’s executive branch legal service now exceeds that of any previous Supreme Court nominee,” he pointed out in a statement. “The Senate Judiciary Committee today released more than 25,400 pages from Judge Kavanaugh’s service as a White House lawyer, bringing the total volume of public executive branch materials to more than 200,000 pages. The previous high water mark for such material was roughly 180,000 pages released during the committee’s consideration of Justice Neil Gorsuch.”

On the Senate floor earlier this week, Grassley made it clear that he did not plan to delay Kavanaugh’s hearing over the Cohen plea deal.

"I’m not going to delay Judge Kavanaugh’s confirmation hearing. There’s no precedent for delaying a hearing in these circumstances," he said. "In fact, there’s clear precedent pointing the other way. In 1994, President Clinton nominated Justice Breyer to the Supreme Court. President Clinton was, at the time, under investigation by Independent Counsel Robert Fiske in connection with the Whitewater land deal. Indeed, President Clinton’s own records were under a grand jury subpoena. Yet the Senate confirmed Justice Breyer by a vote of 87-9 during all this."