Sen. Lindsey Graham Tells CNN: If You Don't Like Me Working With Trump 'I Don't Give a S**t' 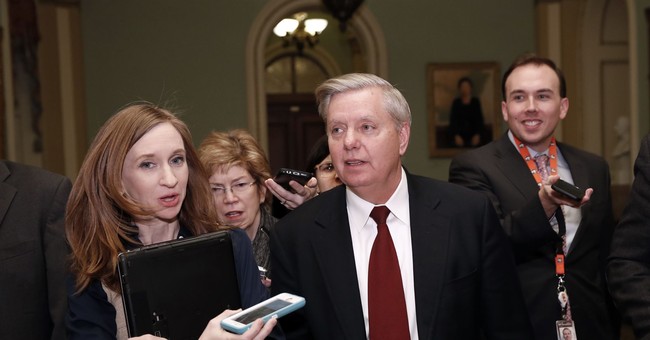 Sen. Lindsey Graham (R-SC) defended his work with President Trump on certain issues on CNN Friday despite his past criticisms of the president. As CNN’s Kate Bolduan continued to press him on the topic, Graham said he’s worked with Obama in the past and there was a double standard about his work with Trump. He then expressed himself in rather strong terminology saying on live television that he doesn’t “give a s**t” if people don’t like him working with Trump.

Boulduan reminded Graham that he went from hating Trump to working with him and that Trump “comes out and hits you again on whatever he decided to on a given day.”

“Do you trust him now?” she asked.

After Graham repeatedly said he did, Bouldan told Graham, “people say this is like two-faced. Where’s the Lindsey Graham of standing up to Donald Trump?”

“Let me just tell you about the critics,” Graham replied. “When I worked with President Obama––and I did on occasion––I was a hero. Now when I work with President Trump, I’m two-faced. I know how the game’s played and I don’t give a damn.”

“I’m going to do what’s best for the country,” he continued, “I like the President, I want to help him, I hope he’s successful, he’s been a friend to me and he says some things I don’t agree with. So if you don’t like me working with President Trump to make the world a better place, I don’t give a s**t.”