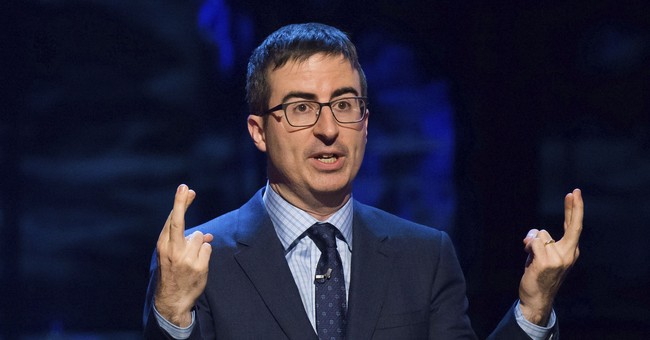 He opened by slamming crisis pregnancy centers for running “friendly-looking ads” to “talk women out of terminating a pregnancy” and using “vague” names and marketing that don’t explicitly state that they do not provide abortions.

He generalized from that example claiming “centers like that one are proliferating” in the United States with 2,700 in the country which, according to Oliver, means that “if they are that prevalent people should absolutely know what they are.”

Oliver quoted Abby Johnson, who he described as an “anti-abortion activist.”

Johnson is a former Planned Parenthood director who founded an outreach group “And Then There Were None” for workers who wanted to leave the abortion industry.

In audio that Oliver plays, Johnson says to a conference of the national pregnancy center group Heartbeat International that “we want to appear neutral on the outside. The best call, the best client you ever get is one that thinks they’re walking into an abortion clinic.”

“There is a group of women who would never think to darken the door of a pregnancy center,” she wrote. “This is primarily because of the false statement they have read in media publications. These are absolutely the primary demographic of women we are trying to reach. We are PROLIFE. We are trying to save babies from dying and women from the pain of abortion. Yes, aside from lying and manipulation, we will do whatever it takes to get that woman in the door, because the life of her child is depending on it.”

She reiterated that “the goal in the pregnancy center movement is to empower women, not to create dependency. So while these centers do provide material assistance, the hope is that the assistance will be temporary. We are trying to offer and hand up, not a hand out.”

Oliver also called out crisis pregnancy centers for providing free ultrasounds that were not performed by medical professionals and claiming they coerced the women receiving the ultrasounds by calling the fetus a baby and the woman a mom.

Johnson replied by pointing out that Oliver isn’t calling out Planned Parenthood for not using licensed medical professionals to perform ultrasounds.

Oliver also slams Heartbeat International’s 2013 suggestions for discussing abortion as “nonsense information.” He calls their statistic that 35 percent of suicidal behaviors may be attributable to abortion “bulls**t” without addressing the source of the statistic.

That statistic comes from a 2011 study published in the British Journal of Psychiatry which found that 10 percent of mental health problems among women, including 35 percent of suicidal behaviors, may be attributable to abortion. An earlier study in the United States also found that women who had had abortions were more likely to commit suicide than those who had given birth.

He filed paperwork in New York to create a nonprofit titled “Our Lady of Choosing Choice” and displayed his mobile crisis pregnancy center “Vanned Parenthood.”

His fellow comedian Rachel Dratch proceeded to act out with Oliver how these centers, in their opinion, disseminate false information, insulting a host of religious beliefs in the process.

“I tell women if they get an abortion, it’ll make a ghost baby that’ll haunt your hoo-ha forever,” Dratch joked. She continued “getting an abortion turns your breast milk into kombucha” and displaying her “prenatal vitamins that are really just gummy bears.”

Dratch’s character tells Oliver he is miraculously pregnant. She then says she gives clients condoms that are “zero percent effective,” because, as she tells Oliver, “I cut the tips off these suckers. Let’s you blow the Holy Spirit right on through.”

“This is all perfectly legal and there is absolutely nothing stopping us from parking outside an abortion clinic tonight and haranguing people first thing in the morning,” Oliver concludes, adding, “and frankly, there really f**king should be.”

Townhall got a glimpse last month at the host of actual services provided by two D.C. pregnancy centers and their response to allegations from abortion groups that they are deceptive or misleading.

The Supreme Court was highly skeptical last month of a California law requiring pro-life pregnancy centers to post messages promoting abortion. Even the liberal justices raised free speech concerns over the law. That California measure was based on the premise, similar to Oliver’s implications and heavily promoted by abortion groups, that these centers require special government regulation since they don’t provide abortion.