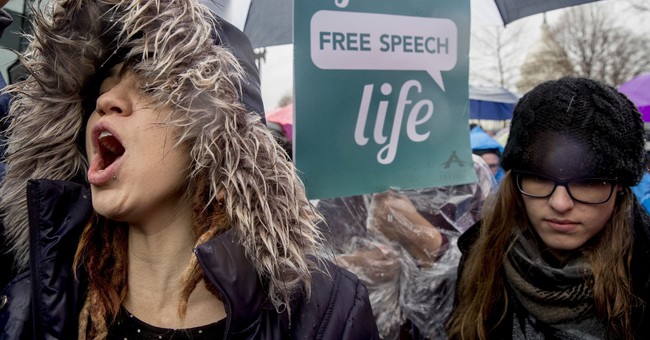 “If it has been gerrymandered, that’s a serious issue,” Kagan said.

Justice Samuel Alito observed that California's criteria about which centers must comply with the law seemed to be aimed at only "pro-life clinics."

"When you put all this together, you get a very suspicious pattern," he said.

The centers are required by the law to post a notice that “California has public programs that provide immediate free or low-cost access to comprehensive family planning services (including all FDA-approved methods of contraception), prenatal care, and abortion for eligible women. To determine whether you qualify, contact the county social services office at [insert the telephone number].”

The conservative justices and Justice Kennedy, the crucial swing vote on the court, said the law appears to violate the First Amendment.

Kennedy said the law was "mandating speech," and forces pro-life centers to "alter the content of their message."

According to the New York Times, “a part of the law that requires some unlicensed centers to disclose their status in large type and many languages when they advertise seemed likely to be struck down.”

Kennedy said that that part of the law constituted an “undue burden” and Justice Sonia Sotomayor agreed that it was “burdensome and wrong.”

Liberal Justice Stephen Breyer brought up that the Supreme Court has permitted states to require abortion doctors to include statements about support available for women who decide to continue their pregnancies.

“In law, what’s sauce for the goose is sauce for the gander,” Breyer said. He did go on to note, however, that since the law was immediately challenged, lower courts have been unable to assess the burdens it places on pregnancy centers.

During oral arguments, both NIFLA and the abortion group NARAL held rallies outside the court despite the freezing rain.

Kate Anderson, legal counsel with Alliance Defending Freedom, the group representing NIFLA in the case, told Townhall they were “very hopeful,” for a good outcome.

“This case is about the right of every American to not be forced by the government to promote a message that violates their conscience,” she emphasized, “and that’s something that should unite the court and unite every American.”

Jeanne Mancini, president of March for Life, said in her remarks at the rally that the case is "critically important,” arguing that “the government shouldn’t have the power to force anyone to speak a message with which it disagrees. Pregnancy centers were established specifically to help women – at no charge – to choose life for their children. The government shouldn’t force them or anyone to advertise for something that directly contradicts the very reason they exist."