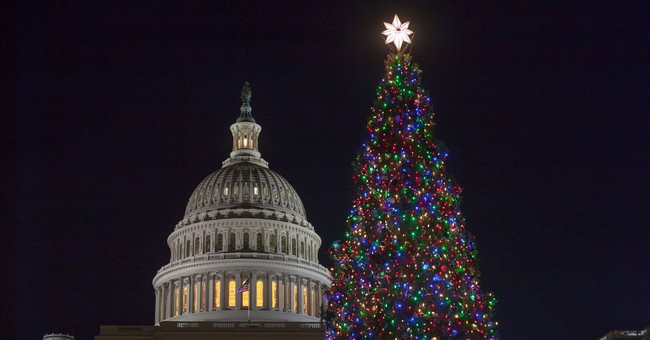 According to a recent poll, a majority of Americans prefer the term ‘Merry Christmas’ to ‘Happy Holidays’ by more than 20 percentage points. The Marist poll, conducted by the Knights of Columbus, found that nearly 6 in 10 of those surveyed prefer ‘Merry Christmas.’

Thirty-six percent said they preferred the term ‘Happy Holidays,’ but 59 percent preferred the traditional Christmas greeting, up from 57 percent when the same poll was conducted last year.

President Trump has repeatedly brought up his preference for saying ‘Merry Christmas,’ over what he considers to be the more politically correct ‘Happy Holidays.’ He even promised on the campaign trail to bring back the Christmas greeting, saying Americans would say “Merry Christmas in every store.”

“We’re getting near that beautiful Christmas season that people don’t talk about anymore. They don’t use the word Christmas because it’s not politically correct," he told the Values Voter Summit in October. “You go to department stores and they will say 'Happy New Year,' or they will say other things and it will be red, they’ll have it painted. But they don’t say - well guess what? We’re saying Merry Christmas again.”

During a speech celebrating the Republicans’ victory on tax reform Wednesday, Trump again declared, "we can say Merry Christmas again."

The official White House Christmas card for 2017 reads, "Merry Christmas and a Happy New Year," and is signed by President Trump, first lady Melania, and their 11-year-old son, Barron.

The Obamas had previously sent out a Happy Holidays or Seasons Greetings card.

The Marist survey consisted of 1,074 adults and “was conducted November 6th through November 9th, 2017 by The Marist Poll. Adults 18 years of age and older residing in the contiguous United States were contacted on landline or mobile numbers and interviewed in English by telephone using live interviewers.”