Here's What Was Left Out of the White House's Christmas Card 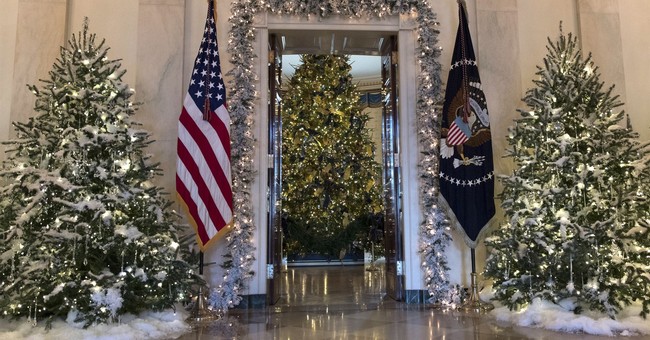 President Trump has followed through on his promise to say Merry Christmas again instead of the politically correct Happy Holidays greeting.

The official White House Christmas card for the 2017 holiday season reads, "Merry Christmas and a Happy New Year," and is signed by President Trump, first lady Melania, and their 11-year-old son, Barron.

The First Family 2017 Christmas card is seen in the East Wing of the @WhiteHouse pic.twitter.com/qT12N07a8S

Trump repeatedly vowed to say Merry Christmas again on the campaign trail, and even brought up the issue again last month at the Values Voter Summit.

“We’re getting near that beautiful Christmas season that people don’t talk about anymore. They don’t use the word Christmas because it’s not politically correct," he said to heavy applause from the audience.

“You go to department stores and they will say 'Happy New Year,' or they will say other things and it will be red, they’ll have it painted. But they don’t say - well guess what? We’re saying Merry Christmas again.”

The Obamas on the other hand always sent out a Happy Holidays or Seasons Greetings card.

“As our family reflects on our many happy years spent in the White House, we are grateful for the friends we’ve made, the joy we’ve shared, and the gifts of kindness we’ve received. We wish you and your loved ones a joyous holiday season and a wonderful new year,” their card from last year read.

Merry Christmas is back at the White House: Trumps unveil their card with no repeat of the Obamas' Happy Holidays https://t.co/cUasLkH2mm