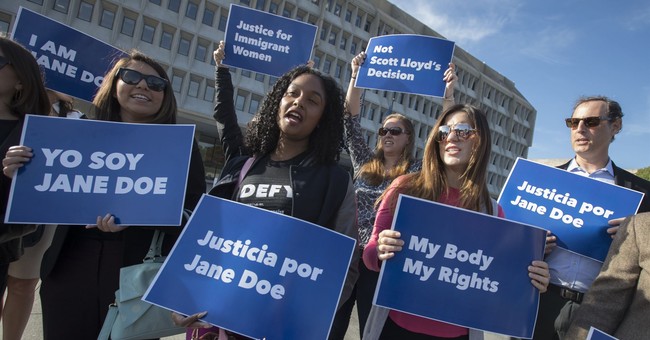 The American Civil Liberties Union (ACLU) filed a lawsuit Friday on behalf of two pregnant unaccompanied minors who are seeking access to abortions in the U.S. while in federal custody. The girls, both 17, were denied abortion access in the federal shelters they’re being held at due to a Trump administration policy of denying to facilitate access for the procedure.

The case is being heard Monday by Judge Tanya Chutkan, who ruled in Jane Doe’s favor in the October case. The teens in the lawsuit, referred to as Jane Roe and Jane Poe, are 10 weeks and 22 weeks pregnant.

The second teen, Jane Poe, said she did not want an abortion as recently as December 4th and is fast approaching a stage of pregnancy, past 22 weeks, where she cannot legally obtain an abortion.

Micah Pickering, a five-year-old who Republicans often reference in support of their 20-week abortion ban, was born at 22 weeks gestational age and survived.

“There has been no judicial determination that either Ms. Roe or Ms. Poe, both 17-year-old minors, are sufficiently mature to make their abortion decision,” the government lawyers argued in court filings.

They argue that if the judge allows these girls to immediately access abortions their “interests would be irreparably undercut.”

The Department of Health and Human Services's (HHS) Administration for Children and Families said the minors could leave the country or "find a suitable sponsor."

“If they choose not to exercise these options, HHS does not believe we are required to facilitate the abortion," they said in a statement.

They add that HHS “has strong and constitutionally legitimate interests in promoting its interest in life, in refusing to facilitate abortion, and in not providing incentives for pregnant minors to illegally cross the border to obtain elective abortions while in federal custody.”

However, the ACLU argues that without the preliminary injunction they are requesting the girls “will both be pushed further into their pregnancies, increasing the risks associated with the abortion procedure, and, if the court does not intervene, Ms. Roe and Ms. Poe will be forced to carry to term against their will.”

“We’ve already stopped the Trump administration from blocking one young woman’s abortion,” Brigitte Amiri, senior staff attorney with the ACLU Reproductive Freedom Project said. “But the Trump administration is relentless in its cruelty, blocking abortion access for the most marginalized people in our country. It’s unreal that the federal government is trying to force more young women to continue their pregnancies against their will."