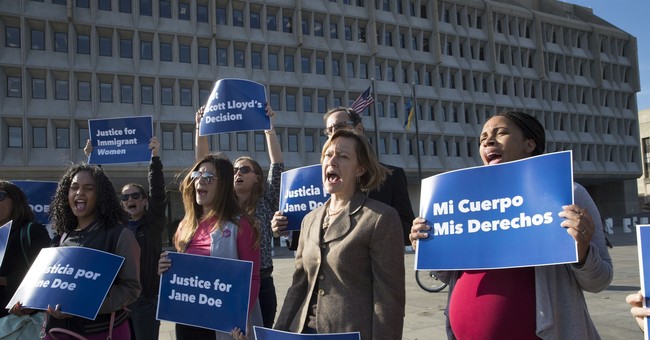 The Department of Justice petitioned the Supreme Court Friday to vacate the D.C. Court of Appeals decision that made it possible for Jane Doe, an unaccompanied minor, to get an abortion. The DOJ argues that the ACLU misled them as to the timing of the abortion making it impossible for them to ask for the Supreme Court’s review before the procedure.

In light of this, they are requesting that the high court “remand to the district court for dismissal of all claims for prospective relief regarding pregnant unaccompanied minors” and that “disciplinary action” may be warranted against Doe’s attorneys in the case.

“The ACLU misled the United States as to the timing of Jane Doe’s abortion,” Department of Justice spokesman Devin O’Malley said, “After informing Justice Department attorneys that the procedure would occur on October 26th, Jane Doe’s attorneys scheduled the abortion for the early morning hours of October 25th, thereby thwarting Supreme Court review. In light of that the Justice Department believes the judgement under review should be vacated, and discipline may be warranted against Jane Doe’s attorneys."

The petition relates that “when Ms. Doe could not receive counseling from a physician on the evening of October 24, her representatives informed the government that her appointment would be moved to the morning of October 25, pushing the abortion procedure to October 26. The government asked to be kept informed of the timing of Ms. Doe’s abortion procedure, and one of respondent’s counsel agreed to do so.”

"By their own account, Ms. Doe’s representatives did three things: they secured the services of Ms. Doe’s original physician (who had provided counseling the previous week), moved her appointment from 7:30 to 4:15 a.m. on the morning of October 25, and changed the appointment from counseling to an abortion," according to the brief. "Although Ms. Doe’s representatives informed the government of the change in timing, they did not inform the government of the other two developments—which kept the government in the dark about when Ms. Doe was scheduled to have an abortion.”

“The government recognizes that respondent’s counsel have a duty to zealously advocate on behalf of their client, but they also have duties to this Court and to the Bar,” the DOJ emphasizes. “It appears under the circumstances that those duties may have been violated, and that disciplinary action may therefore be warranted. At the least, this Court may wish to seek an explanation from counsel regarding this highly unusual chain of events.”

"The en banc court’s decision should not be left on the books for use by these and other plaintiffs," they add.

ACLU Legal Director David Cole responded to the news Friday arguing that it was Jane Doe's lawyers "job" to "see that she wasn't delayed any further."

"Our lawyers acted in the best interest of our client and in full compliance with the court orders and federal and Texas law," he claimed. "That government lawyers failed to seek judicial review quickly enough is their fault, not ours."

Last week Attorney General Jeff Sessions told Fox News that he was "disturbed" that Jane Doe was able to get the abortion before the DOJ was able to request a stay blocking the procedure pending review.

"I don't believe that we should be using taxpayers’ dollars to fund abortions and I think in this case, it certainly was not justified," Session added. "We've resisted it steadfastly and I'm very disappointed that these lawyers were able to take the client around the law to avoid a court hearing at least to see that we were filing."

The ACLU and abortion advocacy groups seized on the case of 17-year-old Jane Doe to argue that illegal immigrants have a "constitutional right" to abortion access. Officials with the Department of Health and Human Services declined to facilitate the teen's abortion and, following the initial ACLU lawsuit, the Department of Justice argued that it sets "a dangerous precedent by opening our borders to any illegal children seeking taxpayer-supported, elective abortions.”