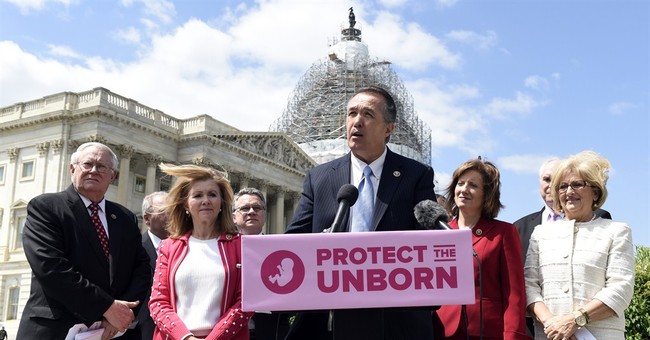 House Majority Leader Kevin McCarthy (R-CA) announced Tuesday that he will bring the Pain Capable Unborn Child Protection Act to the floor on Tuesday, October 3rd. The bill would ban late-term abortions after 20 weeks of pregnancy, the point at which scientists have determined that unborn babies feel pain.

“Looking at him I don’t think anybody would be able to tell,” Rep. McCarthy said. “He’s a perfectly healthy boy and I know everybody here is happy to have you here, Micah. This legislation is for children like Micah, it’s about drawing a line when babies have grown for 20 weeks, when they can feel pain, when they can see their noses, their ears, when we can hear the heartbeats, and we can feel their kicks and at the very least that’s when we can all agree that they should be protected.”

“My heart is grieved that babies are allowed to be aborted at the same age that my own son was born and even later,” she said. “When Micah was born his eyes were still fused shut, his bones were not hardened yet, he couldn’t breathe on his own. He was medicated to stay comfortable from pain.”

“He was alive and he was fighting and he wanted to live,” she said and concluded by displaying a picture of Micah when he was first born, saying he was no bigger than a pack of M&M’s. She gestured towards her healthy five-year-old boy who was shyly standing amongst the politicians and pro-life leaders.

“Protect the lives of the most innocent people in the wonderful nation that we live in, the pre-born,” she told Congress.

Rep. Trent Franks (R-AZ), the bill’s sponsor, said that “it is time that America recognizes and responds to the cries and humanity of these helpless little pain capable babies and the inhumanity of what is being done to them.” He said the bill “calls to all humane Americans to come together for that purpose.”

Rep. Diane Black (R-TN), a nurse, told those gathered that “more and more, we can celebrate the ability we have to save the life of a baby at just 20 weeks after conception – that is truly remarkable.”

“Science tells us that after 20 weeks of pregnancy, babies are able to feel pain inside the womb,” she emphasized. “It is unconscionable that this is a debate we are having here in the United States in 2017.”

She called the bill a “compassionate, commonsense measure” that “protects those who cannot protect themselves when handed a death sentence.”

Rep. Chris Smith (R-N.J.) said that looking over at Micah he “is the face of the pro-life movement,” because “if not for the tremendous love and heroism of his parents he could’ve been yet another victim of the abortion culture and the culture of denial that drives us as a nation to look askance especially those in very elitist positions in this country.”

“Abortionists all over America decapitate, dismember, and chemically poison babies each and every day,” Rep. Smith emphasized, calling the bill a “modest but necessary attempt to at least protect babies who are 20 weeks old.”

If the bill can make it through the House and Senate, President Trump has already committed to signing it into law in a letter he sent to pro-life leaders on the campaign trail.

Rebecca Downs
Why Liberals Are Not Happy a Black Democrat Might Be the Next Mayor of New York City
Matt Vespa
The Chinese Communist Party Goes After a Sitting Member of Congress, and He Responds in the Best Way
Rebecca Downs
Biden Reminds Gun Owners the Government Has Nuclear Weapons
Katie Pavlich
Al Sharpton Made a Solid Observation About Race Relations and Latte-Drinking Libs Who Are Obsessed About It
Matt Vespa
John McAfee Found Dead in Prison Cell Hours After Court Ruled in Favor of Extraditing to US
Rebecca Downs
CARTOONS | Tom Stiglich
View Cartoon
Most Popular