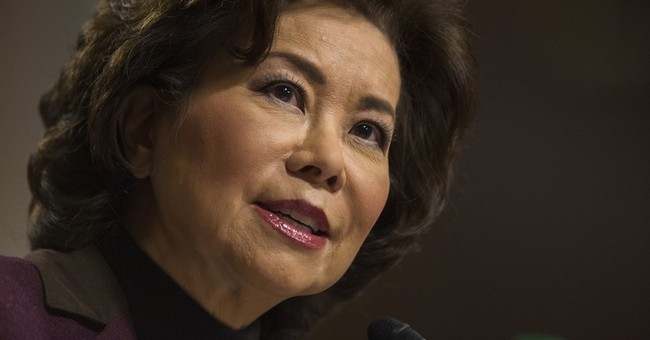 Transportation Secretary Elaine Chao said Tuesday at Politico’s “Women Rule” summit that she has had her own “Me Too” moment of workplace sexual harassment.

“I think that is a dirty little secret that a lot of women have had for a long time. Many of us — especially I think in the years past — have experienced it,” she said. “But the environment was very different.”

At #WomenRule, @SecElaineChao on her #MeToo moment: "The person is still here and he's still around" pic.twitter.com/LpWk4O05Ln

Chao declined to describe the incident further arguing that she decided to move on and the person was “still around.”

"The person is still here and they're still around," she said. "Things change, times change, and it's not worth my while to go back and revisit those negative moments."

"This is an important lesson,” she added. “You know, you will go through difficulties in your life. And I hope you will all triumph. And when you triumph, you need to — you need to help others along the way and it’s not worth my while to go back and revisit those negative moments. I will fight for other women. And I will stand up for other women. But of your own — you got to let it go. Because otherwise, it is too corrosive. It is too negative and it does you a double injury. Because it holds you back."

White House advisor Kellyanne Conway also shared during the summit that she had a “me too” sexual harassment moment involving members of Congress that she shared following the release of the Access Hollywood tape saying “nobody cared about that.”

“If we’re going to have an honest conversation everyone — you can’t pick and choose depending on somebody’s politics,” Conway emphasized.