Sen. Gillibrand 'Disappointed' in Franken, Won't Say He Should Resign 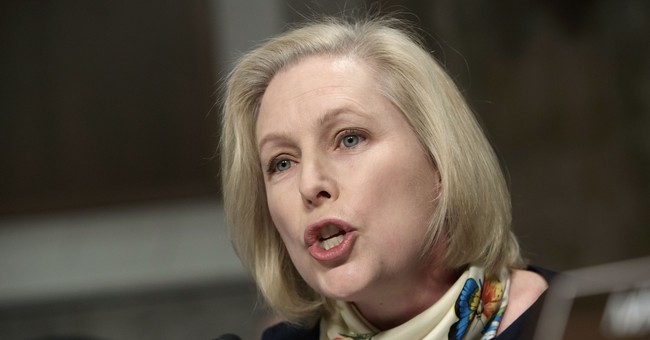 Sen. Kirsten Gillibrand (D-NY) said she was “very disappointed” in her colleague Sen. Al Franken (D-MN) following allegations that he groped and forcibly kissed Leeann Tweeden on a USO tour, allegations that included a photo of Franken groping Tweeden. However, Gillibrand wouldn’t tell MSNBC’s Kasie Hunt whether or not Franken should resign or even what the bar is for a Senator to resign their seat following credible allegations.

Gillibrand stated last week that she believed Tweeden’s allegations against Franken but when directly asked if he should resign she said she expected “to hear more from Sen. Franken on this issue.”

“Should Sen. Franken resign his seat in the Senate?” Kasie Hunt asked again on Sunday.

“Well obviously I was really disturbed by those allegations and very personally disappointed andI think the appropriate thing right now is to have an ethics investigation,” Gillibrand replied.

"What could possibly come out of that investigation?” Hunt asked, given the photographic evidence in the case and Franken admitting to the groping incident. “It seems as though most of the facts here are pretty clear."

"It's important to have the ethics investigation to not only establish the facts, but to have a process," Gillibrand explained.

"To find out what? To what end?" Hunt asked.

“I think it’s important that when we look at these issues of sexual assault, allegations of harassment that we have to look at these cases individually,” Gillibrand replied and shifted to highlighting the need for “a much fuller conversation about this very issue.” She said “the rules in the Senate and in the House are not where they should be.”

"What do you think is the bar for somebody to have to resign their seat?" Hunt pressed.

"I don't know, Kasie," Gillibrand replied. "People will make their own judgments. What I do know is that sexual harassment and sexual assault is prevalent in society, it is persistent, and it is something that we need to have a better process to deal with because we’re failing.”

Gillibrand acknowledged last week that former President Bill Clinton should’ve stepped down over his affair with Monica Lewinsky, a huge admission from a longtime political ally of the Clintons.