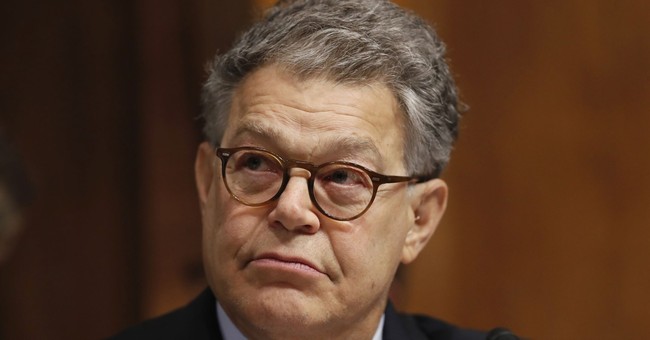 Liberal commentator Sally Kohn and several left-wing groups called for Sen. Al Franken (D-MN) to step down Monday after new allegations surfaced that Franken had groped a second woman in 2010 at the Minnesota State Fair. Franken was accused last week of groping and forcibly kissing Leeann Tweeden who released a photo of Franken groping her while she slept.

“Time for Al Franken to go,” Kohn tweeted. “Wrong is wrong. And the Democrats need to show they strongly AND CONSISTENTLY stand for women’s rights.”

Time for Al Franken to go.

Wrong is wrong. And the Democrats need to show they strongly AND CONSISTENTLY stand for women’s rights.

Credo, a progressive organizing group with 5 million members, and Indivisible, a network of 6,000 grassroots groups, both called for Franken’s resignation Monday.

STATEMENT: Sexual harassment & assault have no place in the progressive movement or in our society. @SenFranken had the chance to take full responsibility & he failed. Sen. Franken should resign from the Senate. @GovMarkDayton should appoint a progressive woman to replace him. pic.twitter.com/bgSvmwi9Td

We believe Lindsay Menz. We believe Leeann Tweeden. Senator @alfranken should be held accountable and he should resign.

The left-wing activist group Justice Democrats called for Franken to resign following Tweeden’s initial accusations emphasizing that “it would be profoundly hypocritical for Democrats to stand by Franken in this moment. We can’t tolerate harassment or assault.”

A spokesperson for Franken told the Minnesota Star Tribune Sunday that Franken will not resign but will do “a lot of reflecting” over the Thanksgiving holiday.