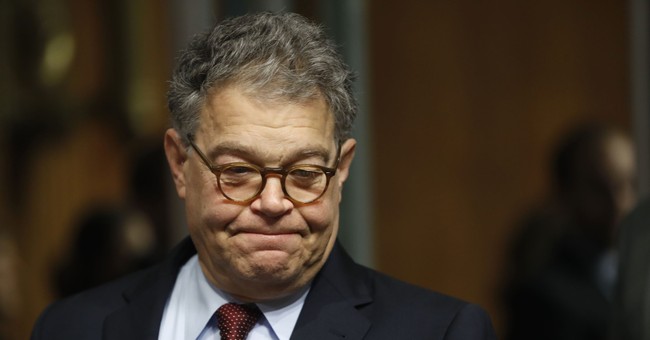 Just when a sexual harassment tempest appeared to be in the rearview mirror for Democratic Senator Al Franken -- with his office announcing that he would not resign -- a second accuser has stepped forward.  As I wrote last week, the combination of (a) premeditated forced kissing, (b) "humorous" groping (as the victim slept), and (c) retaliatory humiliation after she rejected him, all as alleged by the first accuser, suggested that perhaps additional women might step forward.  Franken's conduct didn't seem like the actions of a one-off harasser.   Another woman is now claiming that Franken touched her inappropriately in 2010, when he was a sitting US Senator -- via CNN:

Lindsay Menz, a 33-year-old woman who now lives in Frisco, Texas, reached out to CNN on Thursday hours after Tweeden made her story public. Menz said she wanted to share an "uncomfortable" interaction that left her feeling "gross." According to Menz, she attended the Minnesota State Fair with her husband and father in the summer of 2010, almost two years after Franken was elected to the Senate. Her father's small business was sponsoring a local radio booth, and she spent the day meeting various elected officials, political candidates and celebrities and taking photos with them as they stopped by the booth. When Franken walked in, Menz and her husband, who also spoke with CNN, said they recognized him right away. Menz said she had a brief and cordial exchange with the senator. Then, as her husband held up her phone and got ready to snap a photo of the two of them, Franken "pulled me in really close, like awkward close, and as my husband took the picture, he put his hand full-fledged on my rear," Menz said. "It was wrapped tightly around my butt cheek." "It wasn't around my waist. It wasn't around my hip or side. It was definitely on my butt," she said, recalling that the brazen act lasted three or four seconds. "I was like, oh my God, what's happening"...Lindsay Menz told CNN that she walked away as soon as the photo was taken, without saying anything to the then-first term senator. When she reconnected with her husband moments later, she told him: "He totally grabbed my butt." Jeremy Menz described that conversation the same way to CNN.

There are two forms of contemporaneous corroboration to this story.  First, Menz told loved ones at the time, which is the same sort of evidence being credibly marshaled against Roy Moorein Alabama.  (For what it's worth, she describes herself as a political independent who has voted for Republicans and Democrats approximately equally).  Second, because this alleged incident took place in the social media era, there's this:

Menz's mother, Jodi Brown, also told CNN that she discussed the incident with her daughter immediately after it happened. She said she distinctly recalls her son-in-law saying to her: "Our senator just groped my wife right in front of me." In the photo of Menz and Franken, the side of the senator's face is pressed up against Menz's but the lower halves of their bodies are not shown. Both of them are smiling. Menz posted the photo with Franken on Facebook at the time, on August 27, 2010. Her sister, Cari Thunker, commented under the photo: "Sorry, but you two aren't Bibles (sic) width apart" -- a reference, Thunker explained to CNN, to how physically close Menz and Franken were in the photo.  Menz responded to her sister on Facebook: "Dude -- Al Franken TOTALLY molested me! Creeper!" (The exchange is visible to Menz's Facebook friends)...A friend encouraged Menz to contact a CNN reporter after seeing the network's coverage of sexual harassment in recent days. Menz was emphatic that she "absolutely" would not have decided to share her story had Tweeden not done the same. "I don't want to paint my story in the same light as hers," Menz said, saying she believes what happened to Tweeden is much worse.

Much like Moore's accusers, Menz says she didn't "go public" with her accusations for years, but felt empowered to do so after seeing Leann Tweeden blow the whistle on Franken. Speaking of Tweeden, she appeared on CNN and explained that she finally felt emboldened to expose an 11-year-old episode because other women were finally doing the same to various powerful men.  "Strength in numbers:"

She says she "pulled strength" from fellow women, including the those lining up to say what Roy Moore did to them.  Menz, in turn, pulled strength from Tweeden.  Franken, meanwhile, has issued a quasi-apology in which he claims he has no memory of the incident, emphasizing that he takes thousands of pictures at the state fair.  A number of people have pointed out how his response attempts to shift some blame onto the victim for "feeling disrespected," and does not deny grabbing random women's rear ends while being photographed.  We have also learned that the former SNL star has been edited out of a PBS special honoring David Letterman due to the recent contretemps -- which seems more than a little bit ironic.  The dust seemed to be settling on his case, with Democrats rallying around the "ethics investigation" resolution to the controversy.  But a second woman complicates things, as this liberal writer conceded this morning.  "Death blow:"

I think Franken probably could have survived a single-episode accusation that predated his political career. This looks like a death blow. https://t.co/3pPR1YO8gw

I'll leave you with Bernie Sanders bravely declining to call for Franken's resignation, citing the Minnesotan's popularity with voters, and a breathtaking excerpt from a definitive 1990 GQ profile of Ted Kennedy:

The details in this piece are surreal; hadn't read it in a few years. Ted Kennedy's legacy was celebrated during the 2012 DNC, which also relentlessly attacked GOP's supposed "war on women." #Flashback #LionOfTheSenate #WaitressSandwich pic.twitter.com/nfHMnvjIqh

Kennedy was practically worshipped by the Left as the "lion of the Senate," and held up of a "champion of women" because of his unfailing support for abortion.  Killing a woman and drunkenly tossing waitresses into Senator sandwiches could be overlooked in service of an ideological project -- especially to protect a dynastic scion.