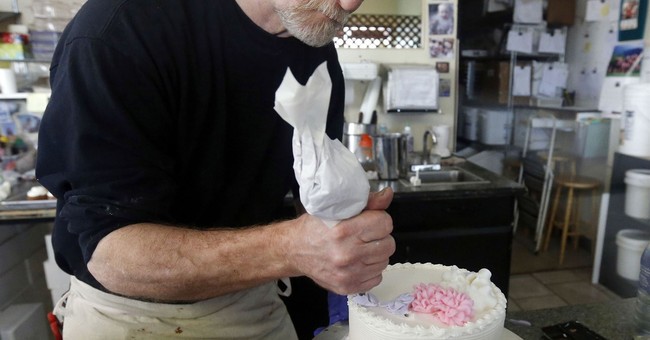 The Trump Administration asked the Supreme Court Wednesday for permission to speak during December 5th oral arguments in the case of Masterpiece Cakeshop v. Colorado Civil Rights Commission which began when Colorado Christian baker Jack Phillips refused to create a wedding cake for a gay couple’s wedding because he disagrees with same-sex marriage.

“The United States has a substantial interest in this case,” writes Solicitor General Noel Francisco who, the DOJ confirmed, will deliver the United States’ argument.

“As a general matter, the United States has a substantial interest in the preservation of federal constitutional rights of free expression,” the motion reads. “In addition, the United States has a particular interest in the scope of such rights in the context of the Colorado statute here, which shares certain features with federal public accommodations laws including Title II of the Civil Rights Act of 1964 and Title III of the Americans with Disabilities Act of 1990.”

“The United States is thus well positioned to address the reconciliation of content-neutral public accommodations laws with federal constitutional freedoms of speech and expression,” the brief concludes. “Participation by the United States in oral argument would therefore materially assist the Court in its consideration of this case.”

Jack Phillips is the owner of the Masterpiece Cakeshop in Denver. He informed Charlie Craig and David Mullins in 2012 that he wouldn’t make a cake for their same-sex wedding due to his religious beliefs.

They complained to the Colorado Civil Rights Commission who agreed that Phillips was violating the state’s anti-discrimination law. The Supreme Court agreed to hear the case in June.

In an amicus curiae brief that the DOJ filed on behalf of Phillips in September, they argue that “forcing Phillips to create expression for and participate in a ceremony that violates his sincerely held religious beliefs invades his First Amendment rights.”

“By producing a custom wedding cake for that ritual, Phillips participates in the wedding celebration in a meaningful way,” they add. “Even though he may not always remain physically present at the wedding, he crafts and delivers his creative expression to the event.”

Colorado has not offered, and could not reasonably offer, a sufficient justification for that compulsion here,” they argue. “Colorado’s public accommoda- tions law compels Phillips not just to create expression but also to participate in a wedding celebration that con- flicts with his sincerely held religious beliefs.”

The case has been highly contentious as it made its way through the courts. The United States Conference of Catholic Bishops, the Thomas More Society, and Concerned Women for America all filed briefs supporting Phillips.

One brief, filed by professional cake artists in September, supported neither party in the case but made a compelling visual argument that the Court should make clear, no matter what it decides, that “cake artists are indeed practitioners of an expressive art and that they are entitled to the same respect under the First Amendment as artists using any other medium.”

Jordan Lorence, Senior Counsel with Alliance Defending Freedom who is representing Phillips in the case, recently made a delicious point about the case via Twitter at a Temple University discussion.

The Masterpiece debate at Temple went well. Some protested me by selling rainbow cake. I bought a piece. Yum! Cake sends a message. pic.twitter.com/PkVbzZ9yd0

Share this on Facebook
Tweet
Dem Pollster Sounds the Alarm: 'We Have a Problem'
Leah Barkoukis
Tucker Carlson Pinpoints Why the Omicron Variant Is So Significant
Leah Barkoukis
Biden Explains Who He Really Thinks Is President
Katie Pavlich
Germany Is Doing a Very Dark Historical Throwback Concerning Its COVID Vaccine Policy
Matt Vespa
It Looks Like Government Will Be Funded After All: Congress Averts Shutdown By Passing Continuing Resolution
Rebecca Downs
It's Not Just Symone Sanders: Kamala Harris is Losing Even More Staffers
Rebecca Downs
CARTOONS | Tom Stiglich
View Cartoon
Most Popular