State Dept. and Nikki Haley Defend UN Vote: No, the US Does Not Support Death Penalty for Gays 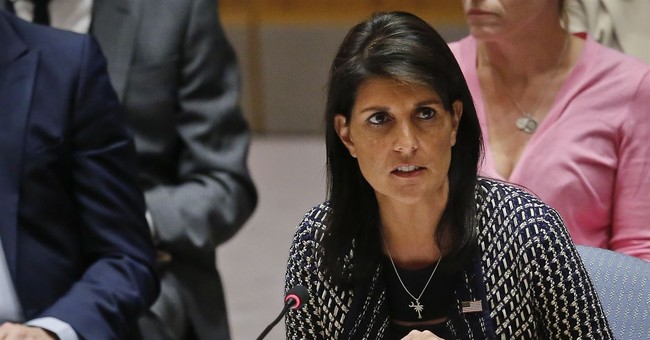 Several left-leaning publications, including Salon and Think Progress, were outraged Tuesday evening that the U.S. voted no, along with Iraq, Qatar, Saudi Arabia, and the UAE, on a resolution in the UN Human Rights Council that condemned the death penalty, including as a punishment for those in same-sex relationships.

The State Department, the White House, and UN Ambassador Nikki Haley all clarified that the vote on the resolution, which ultimately passed the Human Rights Council, was over the fact that the resolution also condemns the death penalty altogether, no matter the circumstances, and advocates for its abolition. They explicitly stated that of course the U.S. does not support the death penalty for gays.

“The headlines and much of the reporting that has come out of that has been misleading,” State Department Spokeswoman Heather Nauert clarified Tuesday, “we voted against that resolution because of broader concerns with the resolution’s approach in condemning the death penalty in all circumstances, and it called for the abolition of the death penalty altogether.”

“We had hoped for a balanced and inclusive resolution that would better reflect the positions of states that continue to apply the death penalty lawfully, as the United States does,” she added. “The United States unequivocally condemns the application of the death penalty for conduct such as homosexuality, blasphemy, adultery, and apostasy. We do not consider such conduct appropriate for criminalization.”

She also pointed out that the U.S. had already clarified their specific reason for the “no” vote on Friday, an explanation that was largely ignored by the media.

A White House Spokesperson told the Washington Blade that “the United States unequivocally condemns the application of the death penalty for homosexuality, blasphemy, adultery and apostasy. As in years past, we voted against this resolution because of broader concerns with the resolution’s approach to condemning the death penalty in all circumstances.”

Nikki Haley tweeted some facts about the vote, emphasizing that the U.S. has “always fought for justice for the LGBT community,” and that the same U.S. vote took place under the Obama administration without controversy, likely referring to the Obama administration abstaining from voting on a similar resolution in 2014 which also advocated for the abolition of the death penalty but did not include the language about same-sex relations.

Fact: There was NO vote by USUN that supported the death penalty for gay people. We have always fought for justice for the LGBT community.

Despite the explanations, Susan Rice, the UN Ambassador under Obama, tweeted a condemnation over the “no” vote.

Shame on US! I was proud to lead U.S. efforts at UN to protect LGBTQ people, back in the day when America stood for human rights for all ???? https://t.co/3Y403bP7Wh

The gay advocacy group, the Human Rights Campaign released a statement Tuesday claiming Haley had “failed” the LGBT community “by not standing up against the barbaric use of the death penalty to punish individuals in same-sex relationships.”

HRC later updated the statement saying it welcomed the administration’s clarification “but continues to be concerned about the Trump/Pence administration’s engagement on the human rights of LGBTQ people abroad.” They also argued that it was “disturbing that leadership in this administration did not discuss this position in their original explanation for the 'no' vote.”

Unconscionable that the United States opposed this resolution. This is not who we are as a nation. https://t.co/WLL0mNOhra