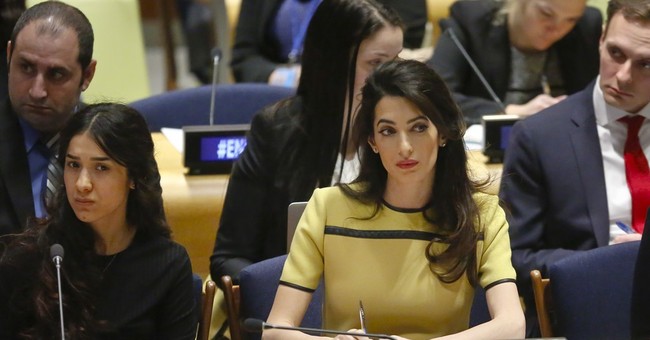 The United Nations Security Council unanimously adopted a resolution Thursday to establish an investigative team that will collect, preserve, and store evidence of acts that may amount to war crimes, crimes against humanity and genocide committed by ISIS in Iraq.

The resolution also creates a Special Adviser to “promote accountability for acts that may amount to atrocity crimes committed by ISIL/Da’esh, and work with survivors, in a manner consistent with relevant national laws, to ensure full recognition of their interest in realizing accountability.”

The resolution, drafted by Britain, was heavily promoted by international human rights lawyer Amal Clooney who was present for the vote.

“It’s really a milestone for the victims of ISIS,” Amal told BBC of the resolution.

Nadia Murad, a Yazidi woman who survived enslavement by ISIS and an award-winning human rights activist, told BBC what the day’s vote meant for her.

“Our biggest concern was to see all that ISIS has been doing just go unpunished,” she said. “Today we know for sure that some of these perpetrators will be brought to justice.”

Ambassador Nikki Haley hailed the resolution in a statement.

“By taking this important step towards holding ISIS accountable for its many unspeakable crimes, we can achieve justice,” she said. “And that, in time, will hopefully begin a process of healing. It may have taken a long time to get here, but today’s resolution is a landmark. It is a major first step towards addressing the death, suffering, and injury of the victims of crimes committed by ISIS in Iraq – crimes that include genocide.”

“The United States was honored to work alongside our Iraqi and British partners over the course of the past year to make this resolution a reality,” she added. “We thank them for their dedication of seeing this through. And while this resolution is about the transnational ISIS threat, we support accountability for all violations of international humanitarian law and human rights violations and abuses.”