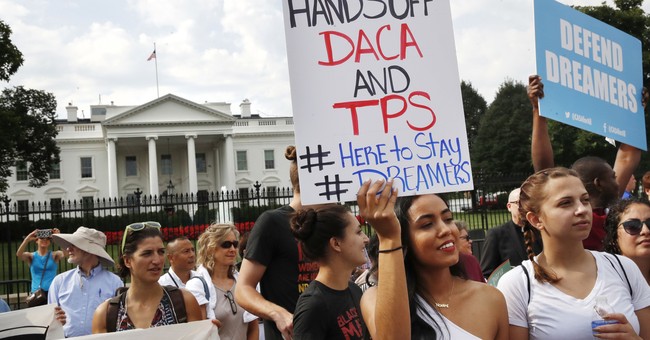 Six recipients of the Deferred Action for Childhood Arrivals (DACA) program sued the Trump Administration in federal court in San Francisco Monday over the president’s decision to end the program which allows minors, who came to the country illegally and met certain conditions, the ability to remain.

The lawsuit echoes similar, recent lawsuits brought by state attorneys general against the decision to end the program, claiming that the decision is a “cruel bait and switch, which was motivated by unconstitutional bias against Mexicans and Latinos,” and “violates the equal protection component of the Fifth Amendment, the due process rights of Plaintiffs and other DACA recipients, and federal law.”

One of the plaintiffs is Dulce Garcia, a San Diego attorney, who was brought to the U.S. from Mexico at the age of 4, according to the lawsuit.

The other plaintiffs are two middle school teachers, a UC San Francisco medical student, a Ph.D. candidate in clinical psychology from Fuller Theological Seminary in Pasadena, and a law student at UC Irvine.

The plaintiffs argue that “the government arbitrarily decided to break its promises to Plaintiffs and hundreds of thousands of other Dreamers by terminating the DACA program” and they are seeking “equitable and injunctive relief to enjoin this unlawful and unconstitutional action, and respectfully request that the Court compel the government to honor its promises and uphold its end of the DACA bargain.”

They cite correspondence in which the government vowed “that DACA recipients would not lose their benefits—including the ability to renew their DACA status—absent specified misconduct. For example, the approval notice granting deferred action under DACA lists only ‘fraud or misrepresentation’ in the application process or ‘[s]ubsequent criminal activity’ as grounds for revoking DACA.”

“The government also made promises about information provided by DACA recipients as part of its efforts to promote the program,” they add. “In particular, since the inception of the DACA program, the government has repeatedly represented to applicants, Congress, and the general public that information provided by DACA applicants about themselves or others (including family members) would not be used for immigration enforcement purposes absent special circumstances.”

President Trump has signaled that he would like Congress to act on this issue before the program ends, in regards to the DACA recipients already in the country, so it is unclear where these lawsuits will end up.

Trump tweeted after his decision to end the program with a 6-month delay that “Congress now has 6 months to legalize DACA (something the Obama Administration was unable to do). If they can't, I will revisit this issue!”

He also tweeted “For all of those (DACA) that are concerned about your status during the 6 month period, you have nothing to worry about - No action!”

Justice Department spokesman Devin O'Malley responded to the lawsuit saying, “it was the previous administration’s arbitrary circumvention of Congress that got us to this point. The Department of Justice looks forward to defending this administration’s position and restoring respect for the rule of law."