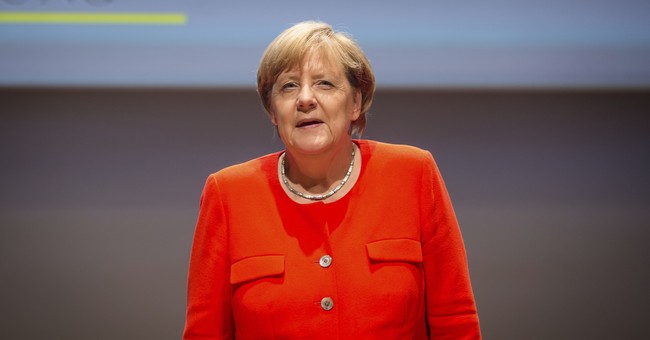 German Chancellor Angela Merkel was put on the spot Monday by a German teen with Down syndrome during a live “Vote Debate” event in the northern city of Lübeck.

“Mrs Merkel, you are a politician. You make laws. I’m an editor at a magazine for people like me who have Down Syndrome,” Cologne-native Natalie Dedreux told the Chancellor according to a translation by The Local Germany.

“Nine out of ten babies with Down Syndrome in Germany aren’t born," she said.

“I don't think it's good politically. This topic is important to me,” she added.

“I don’t want to be aborted, I want to be born,” Dedreux concluded, receiving loud and sustained applause from those gathered.

Merkel was visibly flustered by the question, some in the media noted, according to the Express. She replied that she grew up in communist East Germany where handicapped children were given no support.

"There was no support at all, there was nothing. And this is one of the great advantages of German unity, that today you can see what you could do with support," she said.

Merkel argued that her party, the Christian Democrats (CDU), had fought for years to require that parents receive a compulsory consultation before an abortion.

“It was unbelievably difficult to win a majority for that,” she said.

“She attributed the fact that so many parents opt for abortion to people being unaware of the support that is on offer to them if their child is born with a handicap,” the Local Germany noted.

“Everyone has so much potential and every one can do something for society,” Merkel said.

"There is so much in each person's abilities and possibilities,” Merkel told Dedreux. “Say something like that again and again."

She asked Natalie about the Cologne Caritas group that she works for and told her, “maybe I'll stop by.”

Natalie ended the exchange with a smile, telling Merkel that she felt like Merkel had fought for the rights of the handicapped during her time as Chancellor and that she was a "big fan."

Abortions are permitted in Germany if the woman presents the doctor with a certificate indicating that she obtained counseling at least three days before the operation and not more than twelve weeks have elapsed since conception. However, late-term abortions are permitted after counseling when there is a risk to the health of the mother or when a prenatal diagnosis shows that the unborn baby has a severe disability.