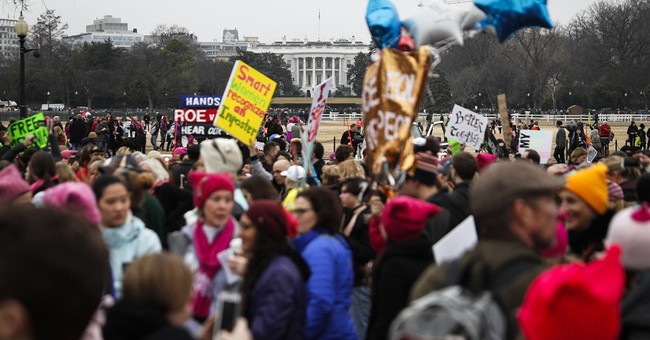 In lieu of effecting actual policy change, the Women’s March is now focused on organizing a series of musical evenings to lift the spirits of depressed liberals in New York City.

To commemorate the sixth month anniversary of the Women’s March their official Twitter account touted a video of a flash mob by the Resistance Revival Chorus as part of their “ongoing resistance” to the Trump administration. They performed a slightly altered rendition of “The Rich Man’s House” in Times Square Friday.

Went down to the White House and I

Took back what they stole from me (Took it back)

Took back my dignity (Took it back)

Took back my humanity

Ain’t gonna let the system walk all over me

The Women’s March also announced that it is organizing “The Resistance Revival: A Restoration of Force,” a “regular series of musical events where we bring song to life in the spirit of collective joy and resistance.”

Join us tomorrow night in New York City for the launch of #ResistanceRevival! https://t.co/i7dpckL49I

“We aim to bring together, in community, a group of diverse artists to join in songs of resistance and protest with the foundation that JOY is an act of resistance!”

“Our movement must be fueled by equal parts protest and culture,” they explain. “The Women's March will host monthly song nights and encourage organizers to hold similar night’s nationally. Music and protest songs have always been a hallmark of the great civil rights movements. We honor this tradition by uplifting these songs and creating new ones for the new resistance.”

In addition to expressing their resistance to Trump, perhaps the singing will improve publicity for the Women's March's after they tweeted their support of a convicted cop killer and had their co-chair Linda Sarsour call for “a form of jihad” against the White House.