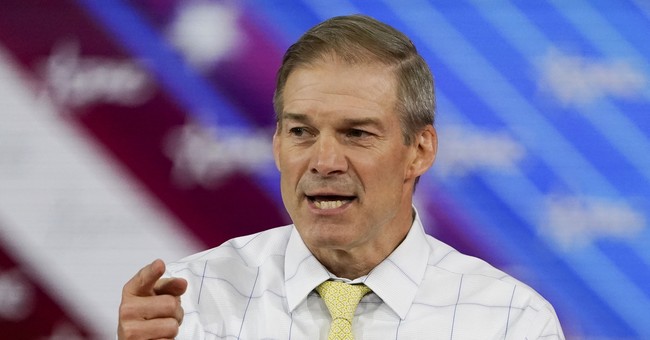 GOP Rep. Jim Jordan (OH) said Friday that House Republicans should weigh the possibility of impeaching President Joe Biden over the president's poor job performance, particularly his administration's inability to curb the surge of illegal immigration at the southern border.

"I think that’s definitely a discussion we have to have," Jordan told The Washington Times at a Republican planning retreat in Florida.

He explained that every House Republican would need to support impeaching the commander-in-chief.

"The conference has to decide," Jordan said. "You have to have complete buy-in from the entire conference and the leadership of our conference."

Jordan is just the latest Republican to suggest an impeachment of the 79-year-old president.

In January, Texas Republican Sen. Ted Cruz said he expects Republicans to consider impeaching Biden "whether it's justified or not" if the party retakes Congress following the 2022 elections.

"Democrats weaponized impeachment,” he said on his podcast "Verdict with Ted Cruz," referring to House Democrats impeaching former President Donald Trump twice. "They used it for partisan purposes to go after Trump because they disagreed with him. And one of the real disadvantages of doing that … is the more you weaponize it and turn it into a partisan cudgel, you know, what's good for the goose is good for the gander."

Cruz said there were "multiple grounds to consider for impeachment" against Biden, but, much like Jordan, cited the president's failure at the southern border as the primary reason to remove him from office.

"Probably the most compelling is the utter lawlessness of President Biden's refusal to enforce the border. His decision to just defy federal immigration laws and allow 2 million people to come here unimpeded in direct contravention of his obligation under Article 2 of the Constitution to take care that the laws be faithfully executed," he said at the time.

"I would like to announce on behalf of the American people, we have to make sure that our leaders are held accountable," Greene said during a Jan. 13, 2021, Newsmax interview. "We cannot have a president of the United States that is willing to abuse the power of the office of the presidency and be easily bought off by foreign governments, Chinese energy companies, Ukrainian energy companies. So on January 21, I will be filing articles of impeachment on Joe Biden."

Greene formally introduced a resolution to impeach the president on Jan. 21, 2021.