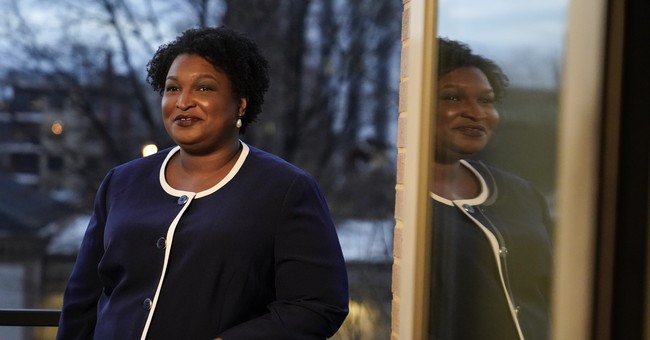 Georgia gubernatorial candidate Stacey Abrams on Tuesday again tried to defend her maskless appearance at an elementary school in Decatur, Georgia, where students were all still forced to wear face coverings.

The Democrat was visiting the school last week for an event celebrating Black History Month.

Abrams said during an appearance on CNN's "Outfront" that she "followed the protocols" and was socially distancing, and that she only removed her mask so every child could hear her speak but then forgot to put it back on when she finished her remarks.

"And then the excitement after I finished because it was so much fun working with those kids, I took a picture and that was a mistake," she continued. "Protocols matter and protecting our kids is the most important thing and anything that can be perceived as undermining that is a mistake and I apologize."

“Protocols matter. Protecting our kids is the most important thing, and anything that can be perceived as undermining that is a mistake, and I apologize.” @staceyabrams shares the story behind photo of her without a mask at a school event. pic.twitter.com/58s4HqL6tO

Photos of Abrams maskless at the elementary school in a room full of masked children began circulating once she and the school's principal each shared the pictures on social media. Abrams and the principal later deleted the photos after backlash ensued.

The number of left wing politicians who post photos posing without masks while all the kids around them are wearing masks is stunning. Here is Stacey Abrams doing it. This is child abuse. pic.twitter.com/actF0YFGrz

Georgia Gov. Brian Kemp (R) and former Georgia Sen. David Perdue (R), both of whom are running to be the Republican nominee in the 2022 gubernatorial election, each slammed Abrams as a hypocrite for her maskless endeavor.

In response, Abrams' campaign released a statement hitting back at the two Georgia Republicans.

"It is shameful that our opponents are using a Black History Month reading event for Georgia children as the impetus for a false political attack, and it is pitiful and predictable that our opponents continue to look for opportunities to distract from their failed records when it comes to protecting public health during the pandemic," the statement read.

Then on Tuesday, Outckick.com published additional photos of Abrams appearing maskless at the elementary school, revealing that the Democrat did not just forget to put her mask back on in one instance during her visit.