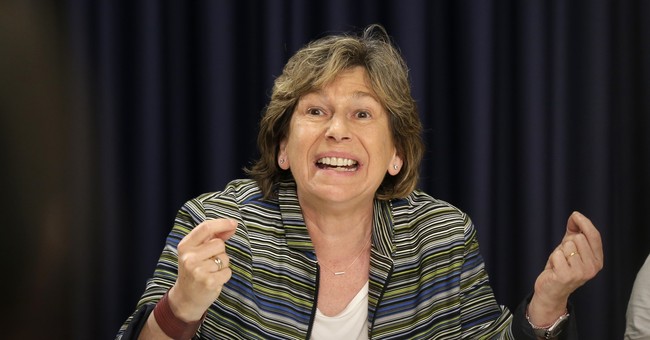 American Federation of Teachers President Randi Weingarten was caught removing her mask at the 2021 SOMOS conference in Puerto Rico, a violation of the local mask mandate, because she believed attendees were having trouble hearing her.

Weingarten previously advocated for "universal masking" in schools, arguing back in August that such a policy would be the safest way to both protect children and keep schools open.

But on Friday, she was seen maskless at the annual event with other panelists in photos shared to social media by a concerned parent, who questioned whether proof of vaccination was required since it appeared that a masking requirement was not enforced.

The teachers union head attempted to defend herself on Twitter by saying that both SOMOS and the hotel hosting the event required everyone to be vaccinated and further stated that she had just tested negative for COVID-19.

Weingarten also apologized for her actions and owned up to her hypocrisy, acknowledging in her tweet that, "If kids are wearing masks in schools to protect themselves & others," then educators "must wear masks inside as well."

This comes despite a no-exceptions public mask mandate, which states that all travelers must "wear a mask or face covering at all times in public."

Weingarten was also called out on her masking hypocrisy by Daniela Jampel, a founding member of the grassroots, nonpartisan group Keep NYC Schools Open, which was created last fall amid the coronavirus pandemic.

"You enjoyed not having to wear a mask, right?" Jampel asked Weingarten in a tweet. "While students in the city you live in - many of whom are vaccinated - have to wear their masks for 6+ hrs every day, even outdoors, while they're in school. If you claim to be pro-student, as you claim, it's time to take a stand."

Weingarten responded by saying that she wears "a mask most of the time" while indoors and further claimed that panelists removed their face coverings because "people were having a hard time hearing" them.

This prompted another parent to highlight her child's difficulty understanding their teacher because of masks, to which Weingarten again acknowledged her hypocrisy, saying that she does not "like masks either" and that the parent has "a real point."

Weingarten added that she wore her mask for the rest of the conference.