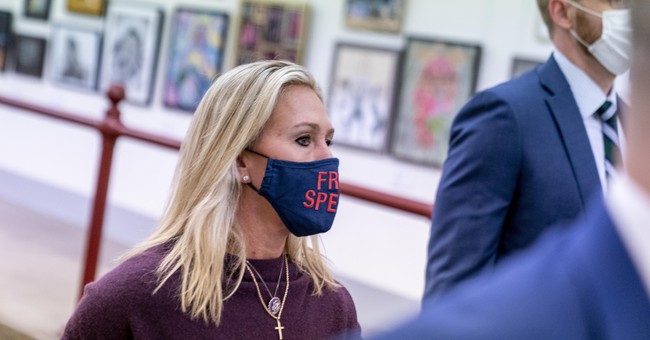 Rep. Marjorie Taylor Greene (R-Ga.) apologized Monday for comparing Speaker Nancy Pelosi's mask mandate in the House to the Holocaust, saying that "there is no comparison" between a face covering requirement and the genocide of six million Jewish people.

Greene said that she had been told by her late father in the past to own up to mistakes and that, upon realizing her error in words, decided to issue a public apology.

I have made a mistake. I wanted to say that I know that words that I've stated were hurtful and for that I am very sorry.

Marjorie Taylor Greene: “I have made a mistake… this afternoon I visited the Holocaust Museum. The Holocaust is- there’s nothing comparable to it.” pic.twitter.com/skrF6YyC3u

Greene's comparison last month came as the Centers for Disease Control Prevention (CDC) updated its guidance, announcing that people who are fully vaccinated are safe without face coverings in most settings.

She said of Pelosi's decision to continue mandating face coverings despite updated CDC guidance on "Real America's Voice" in May:

This woman is mentally ill. You know, we can look back at a time in history where people were told to wear a gold star and they were definitely treated like second-class citizens, so much so that they were put in trains and taken to gas chambers in Nazi Germany, and this is exactly the type of abuse that Nancy Pelosi is talking about.

The mask mandate in the House was lifted Friday for those who are fully vaccinated against COVID-19, following updated guidance from the Capitol physician.