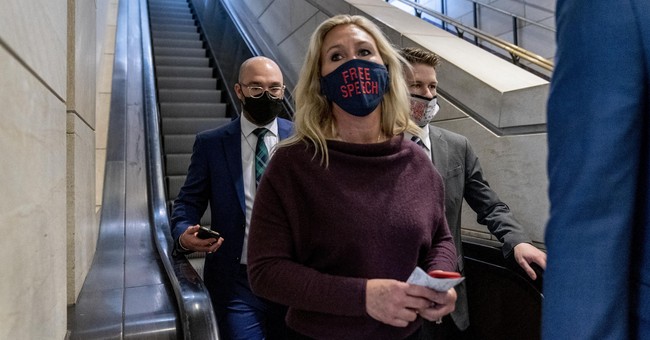 Update: Stefanik condemned Greene's comparison of mask mandates to the Holocaust, but did not name her specifically.

Equating mask wearing and vaccines to the Holocaust belittles the most significant human atrocities ever committed. We must all work together to educate our fellow Americans on the unthinkable horrors of the Holocaust. #NeverAgain

GOP Whip Steve Scalise also said he "does not agree" with Greene's comments.

“Vaccinated employees get a vaccination logo just like the Nazi’s forced Jewish people to wear a gold star. Vaccine passports & mask mandates create discrimination against unvaxxed people who trust their immune systems to a virus that is 99% survivable,” she wrote on Twitter, after lamenting that mask mandates are the “same type of abuse” as gas chambers during the Holocaust.

After weeks of reprehensible comments, McCarthy said that the House GOP conference condemns the language.

“Marjorie is wrong, and her intentional decision to compare the horrors of the Holocaust with wearing masks is appalling. The Holocaust is the greatest atrocity committed in history. The fact that this needs to be stated today is deeply troubling...Let me be clear: the House Republican Conference condemns this language,” he wrote in a statement.

Marjorie is wrong, and her intentional decision to compare the horrors of the Holocaust with wearing masks is appalling.

Let me be clear: the House Republican Conference condemns this language.