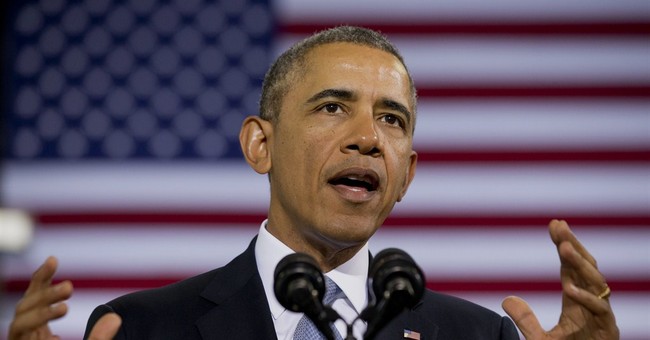 President Obama's legally-required but constantly-delayed official budget request to Congress will be on Capitol Hill soon. The Washington Post reports that "Obama will call for an end to the era of austerity that has dogged much of his presidency." There is much wrong with this worldview.

The only coherent way in which "austerity" has defined much of President Obama's presidency is one in which America faced a once-in-a-generation economic crisis that President Obama himself responded to by massively ramping up federal spending over the course of his first few years in office. That increase in federal spending was combined with below-average tax revenue to create massive budget deficits that everyone, including President Obama, agreed were a problem.

In accordance with the general principles of Keynesian economics, Barack Obama enacted policies that cut the deficit as we continue to climb back out of the 2008 recession. Now, though, President Obama thinks the deficit is no longer a problem - so it's time to increase it.

If I were a self-absorbed "fact checker" I'd rate this claim half-true. We've largely tamed the medium-term deficit through a mixture of tax hikes and spending cuts. Taming the deficit doesn't mean that it won't be a problem in the future - and indeed, the Congressional Budget Office's newest reports confirm that the deficit should still rate highly on the problems that policymakers should be looking to solve.

The CBO's long-term budget report finds that the deficit will dip in 2014 and 2015 but then will start rising - and will never stop due to our increasing health and retirement obligations. The CBO reports on why that's bad:

In the past few years, debt held by the public has been significantly greater relative to GDP than at any time since just after World War II, and under current law it will continue to be quite high by historical standards during the next decade. With debt so large, federal spending on interest payments will increase substantially as interest rates rise to more typical levels. Moreover, because federal borrowing generally reduces national saving, the capital stock and wages will be smaller than if debt was lower. In addition, lawmakers would have less flexibility than they otherwise would to use tax and spending policies to respond to unanticipated challenges. Finally, such a large debt poses a greater risk of precipitating a fiscal crisis, during which investors would lose so much confidence in the government’s ability to manage its budget that the government would be unable to borrow at affordable rates.

It's absurd that anyone would need to have a refresher on this, but apparently it's needed: more debt is worse than less debt!

The CBO also confirms what has become even more apparent in the wake of Obamacare: the federal government is becoming less of a traditional government and more of a social insurance state, as more and more spending will go toward health and retirement entitlements, as well as the mere cost of servicing debt:

As Jonathan Chait points out, as a practical political reality, fighting the rise of our retirement obligations has about a ten-year lag time. It's impractical to change the structure of retirement benefits - both Social Security and Medicare - for current and near-future beneficiaries. We need to get started on reforms now.

President Obama may want to put an end to the "era of austerity," but it's an era that he explicitly pushed for through his rhetoric, his desire for tax hikes and his compromises on spending cuts. The medium-term deficit might be under control, but that doesn't mean fighting future deficits should no longer be a priority for policymakers.