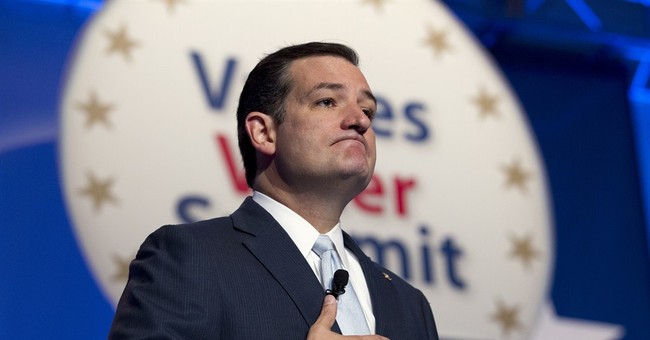 At yesterday's Values Voters summit, Ted Cruz promised attendees that he would go to the White House and hold a hard line when President Obama invited Republican leaders. He did not break that promise.

Politico reports that Sen. Cruz told the President that anything less than significant reforms to Obamacare would be a non-starter when it comes to talks between Republicans and Democrats.

Cruz told Obama that any deal to reopen the government must also provide relief for those negatively affected by Obamacare. In a long gaggle with reporters, Cruz did not use the word “defund” to describe his aspirations for changes to the health care law, but said he wants “substantial” changes.

“I told the president exactly the same thing I have told you here today: That we need to work together and fund the government and at the same time provide substantial relief to the millions of people who are hurting because of Obamacare, who are losing their jobs, being forced into part-time work and losing their health insurance,” Cruz said. “If the outcome doesn’t impact people who are struggling, who are hurting because of Obamacare, then I don’t think it would be a good outcome.”

Asked to give a breakdown of the exchange between Cruz and Obama, White House press secretary Jay Carney simply responded: “No.”

Congress is in session this weekend, with both House and Senate Republicans working overtime to hammer out a deal to resolve the government shutdown impasse. Cruz and other prominent Republicans see this as the last opportunity for Republicans to actually extract concessions from the Obama Administration to reform Obamacare. The Obamacare exchanges went live this week - disastrously - and the law will be nearly fully implemented by January 1.