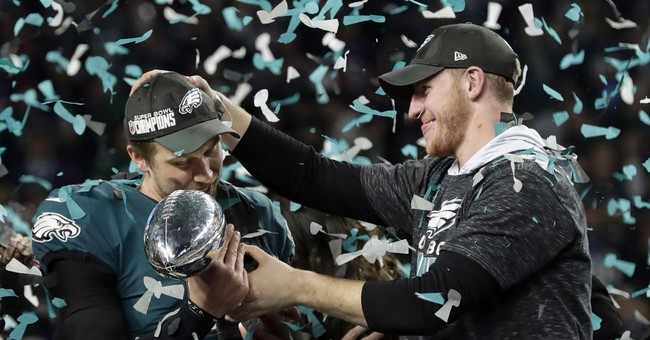 The Hill reported yesterday, that President Trump uninvited the Eagles to the White House: “President Trump on Monday abruptly announced that Super Bowl champions the Philadelphia Eagles would not visit the White House on Tuesday, citing the team's participation in national anthem protests.”

According to the Hill Report, President Trump gave the following statement:

"The Philadelphia Eagles are unable to come to the White House with their full team to be celebrated tomorrow. They disagree with their President because he insists that they proudly stand for the National Anthem, hand on heart, in honor of the great men and women of our military and the people of our country. "The Eagles wanted to send a smaller delegation, but the 1,000 fans planning to attend the event deserve better."

Within minutes of when the White House announced their rescinding of the Eagles invitation  to the White House Rep. Brendan Boyle tweeted “The @Eagles are still welcome to visit the US Capitol. I will have @Wawa coffee waiting.”

Senator Bob Casey also tweeted: “I’m proud of what the @Eagles accomplished this year. I’m skipping this political stunt at the White House and just invited the Eagles to Congress. @Eagles How about a tour of the Capitol?”

As reported by the Hill this morning: “Casey is up for re-election this year. Trump, who won Pennsylvania in 2016, has backed his GOP challenger, Rep. Lou Barletta.”

Regardless of the Eagles dis-invitation, the White House still plans to host an event for those Eagles fans that plan to attend. The White House said that they would “loudly and proudly play the National Anthem” during the event reported the Hill.