Psaki Responds to Calls for Biden to Resign 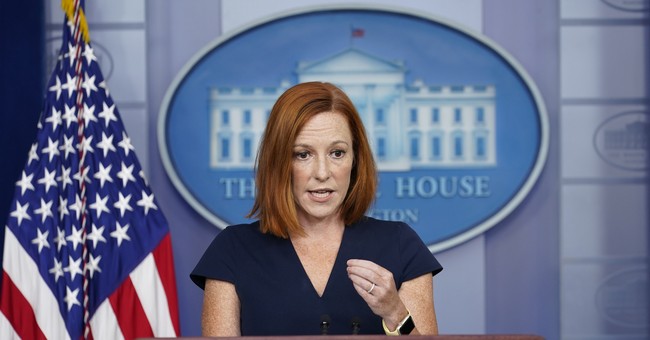 Speaking to reporters at the White House Friday afternoon, Press Secretary Jen Psaki responded to calls for President Joe Biden to resign over the catastrophic exit from Afghanistan.

Psaki tells @nancycordes the White House's response to Republicans calling for Biden to resign over Afghanistan: "The president made absolutely clear that we are going to hunt down, go after and kill the terrorists who are responsible. Everyone should be supportive of that." pic.twitter.com/EU3d7v8BaB

She also addressed the issue yesterday.

"This is a day where U.S. service members, 12 [death toll later updated to 13] of them, lost their lives at the hands of terrorists.  It's not a day for politics, and we would expect that any American, whether they're elected or not, would stand with us in our commitment to going after and fighting and killing those terrorists wherever they live, and to honoring the memory of servicemembers.  And that's what this day is for," Psaki said.

In addition, Psaki was asked if Biden received bad advise from military generals and whether any of them would resign. She said no on both.

To say that today’s loss of American lives in Kabul is sickening does not begin to do justice to what has happened. It is enraging. And Joe Biden is responsible. It is now clear beyond all doubt that he has neither the capacity nor the will to lead. He must resign

Joe Biden is in over his head. Time to resign.

Blinken knew terrorists were coming. He should resign.

They lost the air base and the embassy and had to send in 6,000 troops afterwards anyway. This man needs to resign. https://t.co/edpkyFEK6a