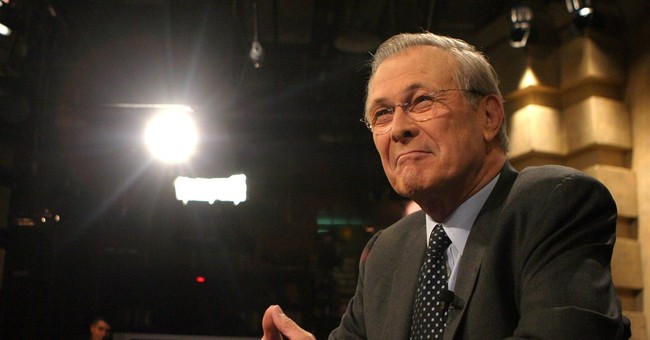 "It is with deep sadness that we share the news of the passing of Donald Rumsfeld, an American statesman and devoted husband, father, grandfather and great grandfather. At 88, he was surrounded by family in his beloved Taos, New Mexico," Rumsfeld's family released in a statement Wednesday afternoon.

A statement from the family of Donald Rumsfeld: pic.twitter.com/AlKYxVvqgF

"History may remember him for his extraordinary accomplishments over six decades of public service, but for those who knew him best and whose lives were forever changed as a result, we will remember his unwavering love for his wife Joyce, his family and friends and the integrity he brought to a life dedicated to country,” the statement continues.

Rumsfeld served as the 13th and 21st Defense Secretary under Republican Presidents Gerald Ford and George W. Bush. Under the Ford administration, he became the youngest person to ever serve in the position. In 2001 and 2003, Rumsfeld oversaw the U.S. invasions into Afghanistan and Iraq.

"On the morning of September 11, 2001, Donald Rumsfeld ran to the fire at the Pentagon to assist the wounded and ensure the safety of survivors. For the next five years, he was in steady service as a wartime secretary of defense – a duty he carried out with strength, skill, and honor," George W. Bush released in a statement. "A period that brought unprecedented challenges to our country and to our military also brought out the best qualities in Secretary Rumsfeld. A man of intelligence, integrity, and almost inexhaustible energy, he never paled before tough decisions, and never flinched from responsibility. He brought needed and timely reforms to the Department of Defense, along with a management style that stressed original thinking and accountability. As Commander in Chief, I especially appreciated how Don took his job personally and always looked out for the interests of our servicemen and women. He was a faithful steward of our armed forces, and the United States of America is safer and better off for his service."

"In a busy and purposeful life, Don Rumsfeld was a Naval officer, a member of Congress, a distinguished cabinet official in several administrations, a respected business leader – and, with his beloved wife, the co-founder of a charitable foundation. Later in life, he even became an app developer. All his life, he was good-humored and big-hearted, and he treasured his family above all else. Laura and I are very sorry to learn of Don’s passing, and we send our deepest sympathy to Joyce and their children. We mourn an exemplary public servant and a very good man," Bush continued.

.@AriFleischer remembers former Secretary of Defense Donald Rumsfeld: "I was very fond of Donald Rumsfeld. I knew him very well....I'm going to miss him. He was a -- a wry man, a sharp man, and a very enjoyable man." pic.twitter.com/NdBdauO8iU

.@KarlRove on the late Donald Rumsfeld: "What a remarkable and long career...He was a very remarkable man...What he did as secretary of defense to modernize the military is something that the last two presidents...benefitted from and future presidents will benefit as well." pic.twitter.com/YLuMKqInKh