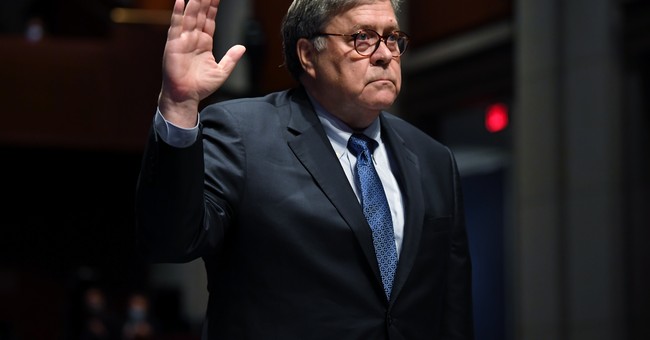 Just had a very nice meeting with Attorney General Bill Barr at the White House. Our relationship has been a very good one, he has done an outstanding job! As per letter, Bill will be leaving just before Christmas to spend the holidays with his family...

"I am greatly honored that you called on me to serve your Administration and the American people once again as Attorney General. I am proud to have played a role in the many successes and unprecedented achievements you have delivered for the American people. Your record is all the more historic because you accomplished it in the face of relentless, implacable resistance. Your 2016 victory speech in which you reached out to to your opponents and called for working together for the benefit of the American people was immediately met by a partisan onslaught against you I which no tactic, no matter how abusive and deceitful, was out of bounds. The nadir of this campaign was the effort to cripple, if not oust, your Administration with frenzied and baseless accusations of collusion with Russia," Barr wrote in his resignation letter. "Few could have weathered these attacks, much less forge ahead with a positive program for the country."

"During your Administration, the Department of Justice has worked tirelessly to protect the public from violent crime; worked closely with leaders in Mexico to fight the drug cartels; cracked down on China's exploitation of our economy and workers; defended competition in the marketplace, especially the technology sector; and supported the men and women of law enforcement who selflessly -- and too often thanklessly -- risk their lives to keep our communities safe," he continued. "As discussed, I will spend the next week wrapping up a few remaining matters important to the Administration and depart on December 23rd."

Barr reassured Trump allegations of voter fraud during the 2020 election will "continue to be pursued" and that "at a time when the country is so deeply divided, it is incumbent own all levels of government, and all agencies acting within their purview, to do all we can to assure the integrity of elections and promote public confidence in their outcome."

Earlier this month, DOJ revealed Barr upgraded the criminal investigation into the origins of the Russia probe -- headed by U.S. Attorney John Durham -- to a Special Counsel investigation.

"Although I expected Mr. Durham to complete his work by the summer of 2020, the COVID-19 pandemic, as well as additional information he uncovered, prevented him from doing so. In advance of the presidential election, I decided to appoint Mr. Durham as a Special Counsel to provide him and his team with the assurance that they could complete their work, without regard to the outcome of the election," Barr wrote in a cover letter to Senate and House Judiciary Committee Chairmen Lindsey Graham and Jerry Nadler, along with Ranking Members Dianne Feinstein and Jim Jordan.