McEnany: Burning of St. John's Church and Defacing of Lincoln Memorial Is Inexcusable 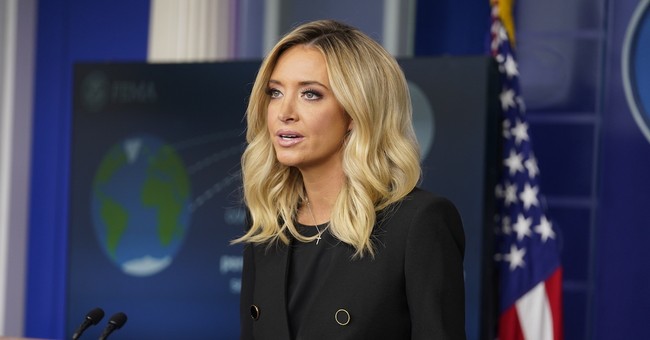 During the briefing at the White House Monday afternoon, Press Secretary Kayleigh McEnany slammed rioters for taking advantage of Americans in pain and said there is no excuse for defacement or burning of historical landmarks.

"Those are violent anarchists, Antifa, who are taking advantage of the pain of people, the pain of the peaceful protestors. It's inexcusable and we have to stand as one America against the burning of the church and the defacement of the Lincoln Memorial," McEnany said. "That doesn't honor the legacy of George Floyd. It doesn't honor the cause."

McEnany also detailed the Civil Rights history of St. John's Church, which sits across from the White House and has served every president since 1816.

"That church supported the bold Civil Rights moment of the March on Washington which began at the Lincoln Memorial," she continued. "The VA was defaced. Literally the word veteran spray painted out of the placard in front of the Department of Veteran Affairs. The Lincoln Memorial defaced. How does that make much sense? The place where the March on Washington began, that momentous occasion in the history of Civil Rights. That memorial was defaced last night. That doesn't honor the legacy of George Floyd. It doesn't."

President Trump has placed General Millie in charge of the National Guard in Washington, D.C., to prevent further rioting. The D.C. mayor has instituted a curfew of 7 pm. Last night it was 11 p.m.

WATCH: @PressSec describes the important history of Washington, D.C.'s historic St. John's Church, and explains why rioters' vandalism does nothing to honor the legacy of George Floyd. pic.twitter.com/bKyPGNlmFx