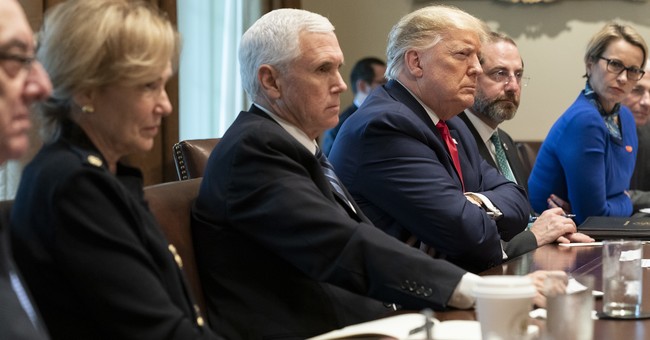 "To unleash the full power of the federal government, I'm officially declaring a national emergency. Two very big words," Trump said.  "The action I am taking will open up access to up to $50 billion dollars for states, territories and localities in our shared fight against this disease."

President @realDonaldTrump from the Rose Garden: "I want you to know that your federal government will unleash every authority, resource, and tool at its disposal to safeguard the lives and health of our people." pic.twitter.com/0V958Voliv

Business executives from Walgreens, Walmart, Quest Diagnostics, CVS, Target, Roche Diagnostics and other medical care companies also spoke at the event and explained they are ready to partner with the federal government to conduct testing for the virus. They will set up new testing sites at stores and in parking lots to get the job done.

This is an impressive roll-out by @realDonaldTrump of CEO's of major companies coming together to fight the coronavirus -while declaring a national emergency. The markets jumped 800+ points since this news conference started. A nation fighting a problem together--IS the message

While new testing sites and kits will be available soon, officials and President Trump are warning against a run on testing if individuals do not have symptoms.

"We are announcing a new partnership with the private sector to vastly increase and accelerate our capacity to test for the coronavirus,” Trump said. "We don't want people to take a test if we feel that they shouldn't be doing it, and we don't want everybody running out and taking. Only if you have certain symptoms."

New details on logistics for testing were also revealed and explained by Dr. Deborah Birx, who serves on the Wuhan coronavirus task force under Vice President Mike Pence.

The U.S. will implement “drive-by” coronavirus testing, Dr. Deborah Birx with the State Department says, which will allow patients to be swabbed without leaving their car and get lab results in 24-36 hours after they fill out an online screening questionnaire pic.twitter.com/HEVAm96nk3

On a separate note, President Trump announced the United States is buying "large quantities" of crude oil to stock up American reserves.