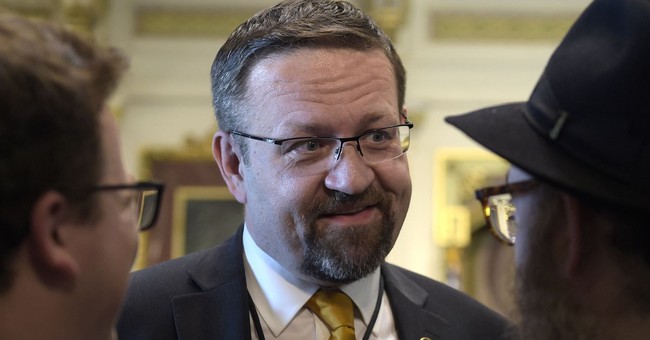 Since telling American citizens who immigrated to the United States to "go back" to their original countries is in the news, it's important to remind everyone about despicable behavior from elected Democrat officials on the issue.

When President Trump tapped Hungarian-American immigrant Sebastian Gorka to serve in the White House, Nadler called for an investigation into how he became an American citizen and used government resources to get him deported.

Democrat Senators Dick Durbin, Richard Blumenthal and Ben Cardin tried to revoke his citizenship based on media lies and smears about Gorka being a Nazi. He isn't a Nazi.

"We write to follow up on our March 17 letter urging the Department of Justice (DOJ) and Department of Homeland Security (DHS) to immediately investigate whether senior White House counterterrorism advisor Sebastian Gorka falsified his naturalization application or otherwise illegally procured American citizenship.  Five months have passed, yet you still have not confirmed that you are investigating these serious allegations," the Senators wrote in a letter to the Department of Justice in 2017.

A lot of people don’t know about this—but it’s true. Vile and grotesque Senate Democrats tries to get @SebGorka **DEPORTED** based on nothing. They actually took action, pressuring USG through letters—as opposed to a “love it or leave it” throwaway line. https://t.co/RadqAUQiRA

At the time of the Democrat attacks on Gorka, I wrote about the bogus reporting fueling their corrupt overreach and abuse of power.

For weeks, the left has been waging an all out assault on Sebastain Gorka, Deputy Assistant to President Trump and member of the National Security Council. The attacks have been printed in media across the internet and promoted by Democrat lawmakers on Capitol Hill.

Gorka, an immigrant from communist Hungary and proud American citizen, is a staunch opponent of radical Islam and the political correctness that feeds it. Because of this position, in addition to his father having fought against the communist government in his former country, the left has classified him as a Nazi. Many have also called for his citizenship to be stripped.

The double standards for outrage are alive and well.