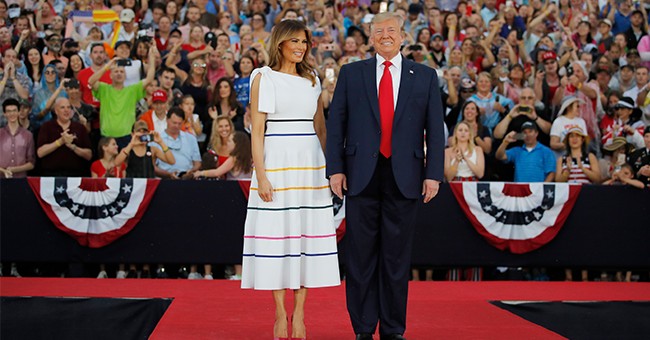 President Trump's Salute to America speech is still receiving rave reviews, even from some of his usual critics.

In case you missed it, you can watch the entire Independence Day celebration from the National Mall in Washington D.C. below.

"Today, we come together as one nation with this very special Salute to America.  We celebrate our history, our people, and the heroes who proudly defend our flag -- the brave men and women of the United States Military," Trump said from the base of the Lincoln Memorial. "As we gather this evening in the joy of freedom, we remember that we all share a truly extraordinary heritage. Together, we are part of one of the greatest stories ever told: the story of America.  It is the epic tale of a great nation whose people have risked everything for what they know is right and what they know is true.  It is the chronicle of brave citizens who never give up on the dream of a better and brighter future.  And it is the saga of thirteen separate colonies that united to form the most just and virtuous republic ever conceived."

"On this day, 243 years ago, our Founding Fathers pledged their lives, their fortunes, and their sacred honor to declare independence and defend our God-given right," he continued. "We will always be the people who defeated a tyrant, crossed a continent, harnessed science, took to the skies, and soared into the heavens because we will never forget that we are Americans and the future belongs to us. The future belongs to the brave, the strong, the proud, and the free.  We are one people, chasing one dream, and one magnificent destiny.  We all share the same heroes, the same home, the same heart, and we are all made by the same Almighty God."