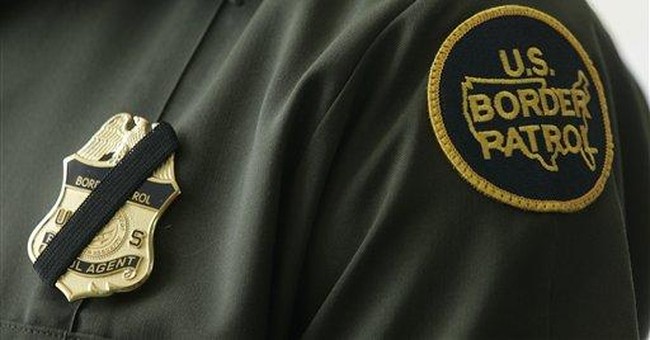 "A Yuma Station Border Patrol agent was assaulted by an illegal alien Sunday morning, just 10 hours before agents with the Yuma Sector Border Patrol Search Trauma and Rescue Team undertook a humanitarian mission to rescue two illegal aliens who were stranded in the desert," U.S. Customs and Border Protection [CBP] released in a statement. "On Sunday morning, three subjects made an illegal entry into the United States near Andrade, California. Agents apprehended one of the illegal aliens in the group without incident. As they attempted to apprehend the second subject, the illegal alien punched an agent multiple times and attempted to evade arrest by fleeing. Agents searched the area and apprehended the assaultive subject, an 18-year-old male from Honduras. The third subject absconded back into Mexico."

In a separate incident, another Border Patrol agent working in a different part of the state was assaulted by an illegal alien from Ecuador.

"Tucson Sector Border Patrol agents assigned to the Sonoita Station arrested a 37-year-old Ecuadorian man after he assaulted an agent atop a mountain south of Tucson Wednesday evening. Agents responded to a group of suspected illegal aliens walking along a remote trail near Lone Mountain outside of Patagonia. As agents attempted to apprehend the suspected illegal aliens, a man in the group struck a Border Patrol agent several times," a CBP statement describes. "The man fought the agent for several minutes even as they both slid down a hillside. After several minutes, additional agents were able to aid in handcuffing the man and ending the struggle. Two Mexican nationals, also illegally present in the country, were arrested during the incident."

#BorderPatrol agents assigned to the Sonoita (AZ) Station arrested an illegal alien after he assaulted an agent atop a mountain south of Tucson. The Ecuadorian national is facing charges for assaulting a federal agent. Details: https://t.co/ViszVhtG2h pic.twitter.com/DZJhX27yFr

Luckily, agents involved in the incidents did not suffer severe injuries.