BREAKING: Ahead of Elections, Israeli Prime Minister Benjamin Netanyahu to Be Indicted 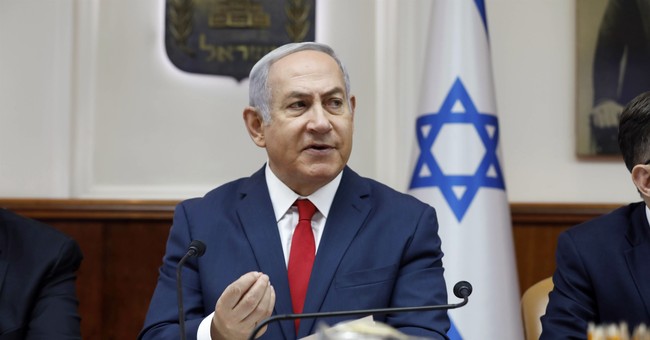 Israeli Prime Minister Benjamin Netanyahu will be indicted Thursday by the Jewish state's Attorney General, Avichai Mendelblit, for a series of alleged bribes, fraud and breach of the public trust.

BREAKING: Netanyahu to Be Charged With Bribery Pending Hearinghttps://t.co/8rWJ272wo2 pic.twitter.com/IQXtldU9C1

Netanyahu has vehemently denied the allegations, arguing they are purely political. He will not resign, will fight the charges and will hold a press conference this afternoon to publicly dispute them. From December:

Should Israel’s attorney-general decide to press charges against Netanyahu, he would announce the indictment pending a hearing, after which charges could be filed in court.

Asked at a news conference in Rio de Janeiro whether he would bow out of the election race should that happen, Netanyahu said: "I don't intend to resign."

"According to the law, the prime minister does not have to resign during the hearing process ... The hearing doesn't end until my side is heard," he said.

"Imagine what would happen if a prime minister is ousted before the hearing is finished, and then after the hearing they decide to close the case. It's absurd. It's a terrible blow to democracy."

"This is a death wish. It is a disgrace, and I say that as an American looking afar, thousands and thousands of miles into little Israel. And replace him with what, melee mouths who have no relationship whatsoever with the United States who couldn’t figure out their way out of a paper bag? They’re going to work with Putin? They’re going to confront the Iranians? Is this really the time to remove a prime minister like this?” he said.

Israeli elections will be held in April. In order to win, Netanyahu must build a coalition. He is the head of the Likud party.

Share this on Facebook
Tweet
Why Was Andrew McCabe Let off the Hook?
Guy Benson
Radio Silence: Steyer Was Caught Off Guard By a Basic Economics Question
Beth Baumann
Stacey Abrams Says She 'Absolutely' Will Run For President