Border Patrol Caught a Convicted Murderer From Honduras in the Caravan 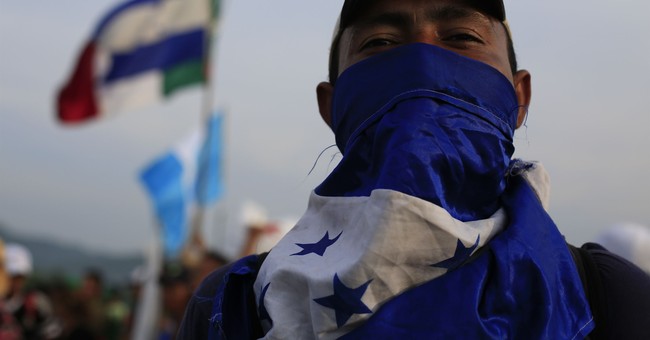 Border Patrol agents in San Diego arrested an alien from Honduras earlier this week after he crossed into the United States illegally. The man was part of the caravan from Central America that is currently parked in Tijuana, Mexico.

After further investigation, it was discovered the illegal alien was in Honduran prison for nearly two decades after being convicted of murder.

"On Nov. 24th, around 11 P.M., agents detected three people crossing the border illegally approximately one-mile east of the San Ysidro port of entry. Agents responded, arrested the three men, and transported them to a nearby Border Patrol station for processing," Customs and Border Protection released Friday afternoon. "At the station, agents discovered documents indicating one of the men, 46 year-old Miguel Angel Ramirez, was recently released from prison in Honduras.  Ramirez later admitted he was arrested and convicted for murder in Honduras and was released just four months ago. The San Diego Sector Border Patrol’s Foreign Operations Branch corroborated the man’s admission with the Honduran Consulate in Los Angeles and discovered that Ramirez served 16 years in a Honduran prison for his crime. Ramirez claimed he traveled with the migrant caravan from Honduras to Guatemala and Mexico."

One of the other men who illegally crossed into the United States after traveling in the caravan has been deported in the past. He is also from Honduras. Earlier this week, an MS-13 member was found in the caravan.

“As DHS confirmed weeks ago, there are at least 600 known criminals in the caravan flow. The fact that Border Patrol arrested a murderer within the first caravan-related apprehensions at our southern border proves how real the threat of the caravan is to our national security and public safety. DHS will not tolerate illegal or forcible entry into our country,” DHS Press Secretary Tyler Houlton said in a statement about the situation.