Sarah Sanders Slams Omarosa From the White House Podium: She Cares More About Herself Than America 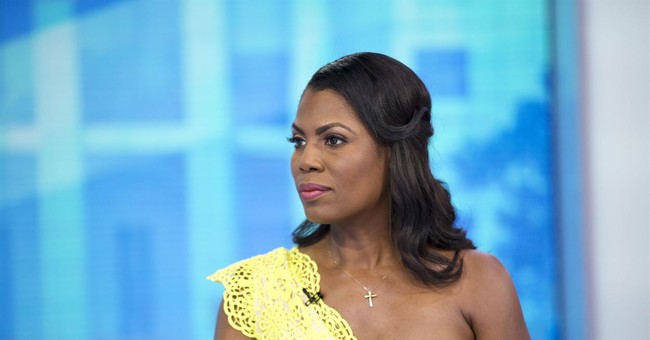 "I'm certainly, I think like most people that worked with her, very disappointed that she would go to such a self serving, somebody who blatantly cares about more about herself than our country," Sanders said. "I think it's really sad what she's doing at this point."

.@PressSec on Omarosa: "I think it's really sad what she's doing at this point." pic.twitter.com/atlRK3qtXc

Over the weekend Sanders issued a similar statement from New Jersey, where President Trump was staying last week.

“The very idea a staff member would sneak a recording device into the White House Situation Room, shows a blatant disregard for our national security – and then to brag about it on national television further proves the lack of character and integrity of this disgruntled former White House employee,” Sanders said.

Kellyanne Conway also teed off on the former employee Tuesday morning during an interview with Fox News.

“I would further say that Omarosa, who I considered a colleague here and a friend for a very long time, a lot of us women put a shower together for her before she got married. I know her mother, I know he husband," Conway said. “It does seem ungrateful to go and record people in the Situation Room.”

In the meantime, the Trump campaign has issued a lawsuit against Omarosa for allegedly breaking a non-disclosure agreement.