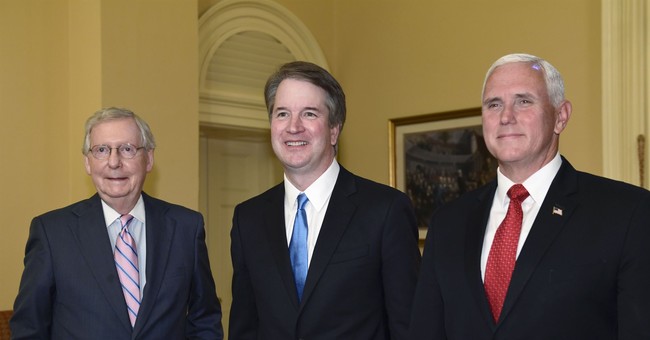 It's been three weeks since Supreme Court Justice Anthony Kennedy announced his retirement from the bench and just 10 days since President Trump named U.S. Circuit Court Judge Brett Kavanaugh as his replacement.

Since then, Kavanaugh has been meeting with a number of Senators on Capitol Hill, shepherded by Vice President Mike Pence and former Arizona Senator Jon Kyl.

According to Senate Judiciary Committee Chairman Chuck Grassley, who will oversee the upcoming confirmation hearing, Kavanaugh should be fitted for his robe and confirmed to the Supreme Court within 70 days.

"Judge Kavanaugh is one of the most respected jurists in the country. He’s among the most qualified candidates to ever come before the Senate. I look forward to carefully reviewing his record," Grassley said during a Committee business meeting Thursday morning. "Our process in the Senate Judiciary Committee will be thorough, modern, and efficient. We’ll use newer tools to review more material than we ever have before. All members of this committee will have far greater visibility into his record and judicial thinking than they have had with any previous nominee. And with this extra visibility, I can foresee no reason to stray from the timelines of previous high court nominations. We completed our work on the nomination of Justices Kagan and Gorsuch within 70 days. So, I expect to do the same in this case."

Senate Majority Leader Mitch McConnell has been adamant about getting Kavanaugh confirmed before the 2018 midterm elections and before the Supreme Court opens a new session in the fall.

According to recent polling, the majority of Americans want Kavanaugh confirmed as quickly as possible. From NBC News/Survey Monkey: