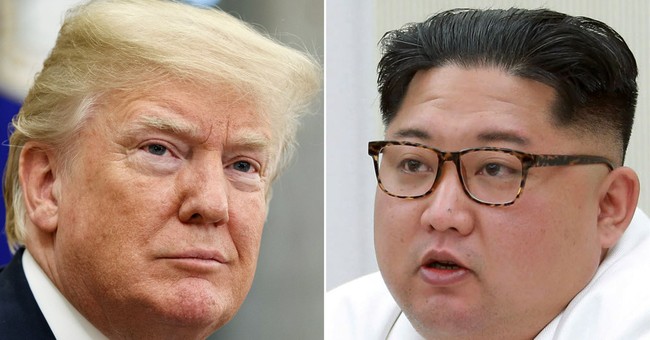 Ahead of the summit, which has gone on as planned after a cancellation two weeks ago, National Security Advisor John Bolton and Secretary of State Mike Pompeo have worked hand-in-hand to prepare the president with the best intelligence and information.

Monday morning the White House released new information about how the meeting with go down and revealed President Trump will meet with Un on his own for the first portion of the summit. Only translators will be in the room with the two leaders.

"President Donald J. Trump will meet with North Korean leader Kim Jong Un tomorrow morning at 9:00 a.m. Following the initial greeting, President Trump and Chairman Kim will participate in a one-on-one meeting, with translators only, an expanded bilateral meeting, and a working lunch," White House Press Secretary Sarah Sanders released in a statement. "The discussions between the United States and North Korea are ongoing and have moved more quickly than expected."

Once the one-on-one meeting is over, it will be expanded into a bilateral that includes Pompeo, Bolton and Chief of Staff John Kelly. Sanders, U.S. Ambassador to the Philippines Sung Kim and National Security Council Senior Director for Asia Matt Pottinger will also attend.

Over the weekend, Pompeo again reiterated the U.S. demand North Korea denuclearize as part of any deal moving forward and did so again Monday morning.

Early pre-brief with my @StateDept team. Amb Kim meets with #DPRK today. We remain committed to the complete, verifiable, irreversible denuclearization of the Korean Peninsula pic.twitter.com/ybtrMJuqK8

After the summit is over, President Trump will give a press conference to local and traveling press. He will leave Singapore at 8 p.m. local time in route back to the United States.