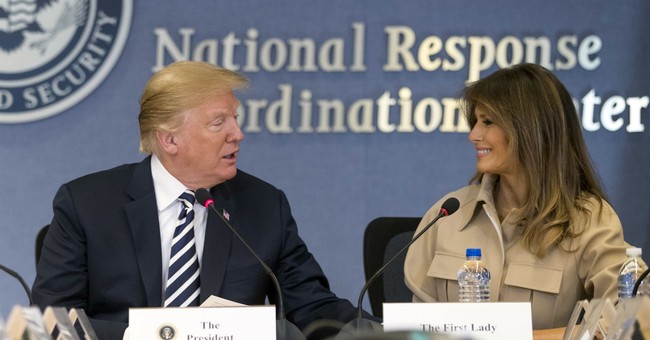 The leftist media has been engaged in conspiracy theories about First Lady Melania Trump's whereabouts for weeks, despite knowing she underwent serious surgery in May.

The latest criticism is the First Lady's absence from President Trump's upcoming trips to the G7 summit in Canada and his meeting with North Korean dictator Kim Jong Un in Singapore next week.

Speaking to reporters from the South Lawn of the White House before taking off for the G7 Friday morning, President Trump explained why his wife won't be joining him.

"The First Lady is great...she wanted to go -- can't fly for one month," he said. "The doctors say. She had a big operation. That was a, close to a four-hour operation. And she's doing great."

"And you know what?  She is a great First Lady," he continued.

As a reminder, here are the statements the First Lady's office put out at the time of her surgery and after she left the hospital. She was in the hospital for nearly a week.

This morning, First Lady Melania Trump underwent an embolization procedure to treat a benign kidney condition.  The procedure was successful and there were no complications.  Mrs. Trump is at Walter Reed National Military Medical Center and will likely remain there for the duration of the week.  The First Lady looks forward to a full recovery so she can continue her work on behalf of children everywhere.

The First Lady returned home to the White House this morning.  She is resting comfortably and remains in high spirits.  Our office has received thousands of calls and emails wishing Mrs. Trump well, and we thank everyone who has taken the time to reach out.

In the meantime, garbage like this is still being published.

The first lady's office said she'd undergone a procedure for a benign kidney condition, but Trump says the first lady isn't traveling with him because she had a four-hour operation and doctors told her not to fly for a month. https://t.co/qpNUzhovz1

Her office said the condition was benign, they did not say the surgery was benign nor minor. Resting after surgery is standard procedure. This is ridiculous. https://t.co/dn9ZYOeUXw