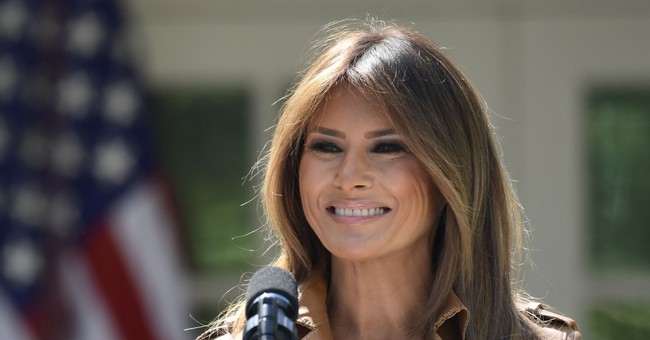 "This morning, First Lady Melania Trump underwent an embolization procedure to treat a benign kidney condition.  The procedure was successful and there were no complications," her spokesperson released in a statement at the time. "Mrs. Trump is at Walter Reed National Military Medical Center and will likely remain there for the duration of the week.  The First Lady looks forward to a full recovery so she can continue her work on behalf of children everywhere."

While the First Lady's condition was "benign," it was serious. She spent nearly a week in the hospital recovering.

"The First Lady returned home to the White House this morning.  She is resting comfortably and remains in high spirits.  Our office has received thousands of calls and emails wishing Mrs. Trump well, and we thank everyone who has taken the time to reach out," her spokesperson said.

A sincere thank you to Walter Reed Medical Unit @WRBethesda & to all who have send good wishes & prayers! I am feeling great & look forward to getting back home @WhiteHouse soon.

On Sunday the White House announced Melania will not travel with President Trump to the summit with North Korea in Singapore or the G7 Summit in Quebec.

During a segment on CNN the same day, the host and guests claimed the First Lady is "missing," despite journalists saying they've seen her in recent days.

If any First Lady "disappeared," you'd "want to know where she is." Here's our @CNN discussion: https://t.co/qCLndJKRMp pic.twitter.com/eJ5KY0xTzu

The day CNN claims she went "missing," May 11, is three days before she underwent surgery. As of June 3, a number of journalists have seen her at the White House.