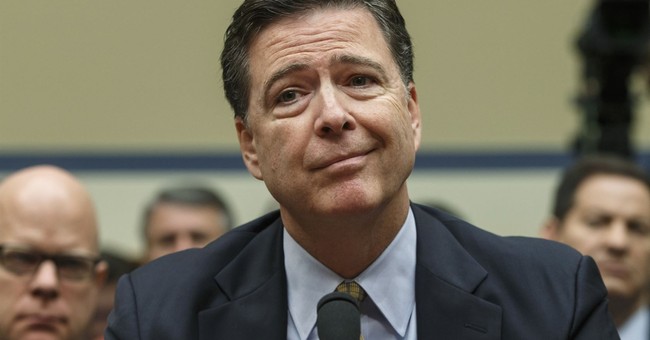 The Department of Justice Office of the Inspector General released a semi-annual report to Congress Friday morning showing the review into how the FBI handled a number of issues, including the criminal investigation into Hillary Clinton's mishandling of classified information and matters during the 2016 presidential election, is ongoing.

The OIG continues its important ongoing work, including the following audits, evaluations, inspections, and special reviews:

•Actions by the Department of Justice and the FBI in Advance of the 2016 Election. The review will examine whether DOJ and the FBI followed policies or procedures in connection with, or in actions leading up to or related to, the FBI Director’s public announcement on July 5, 2016, and the Director’s letters to Congress on October 28 and November 6, 2016, and whether certain underlying investigative decisions were based on improper considerations.

The review also will examine allegations that the FBI Deputy Director should have been recused from participating in certain investigative matters; that DOJ’s Assistant Attorney General for Legislative Affairs improperly disclosed non-public information and/or should have been recused from participating in certain matters; that other DOJ and FBI employees improperly disclosed nonpublic information; and that decisions regarding the timing of the FBI’s release of certain Freedom of Information Act (FOIA) documents on October 30 and November 1, 2016, and the use of a Twitter account to publicize this release, were influenced by improper considerations. The review will not substitute the OIG’s judgment for the judgments made by the FBI or the Department regarding the substantive merits of investigative or prosecutive decisions. If circumstances warrant, the OIG will consider including other issues that may arise during the course of the review.

Earlier today, Senate Judiciary Committee Chairman Chuck Grassley postponed a scheduled hearing about the findings of the review by one week. When the final report is released, Inspector General Michael Horowitz will be called in front of the Committee to testify about his findings.