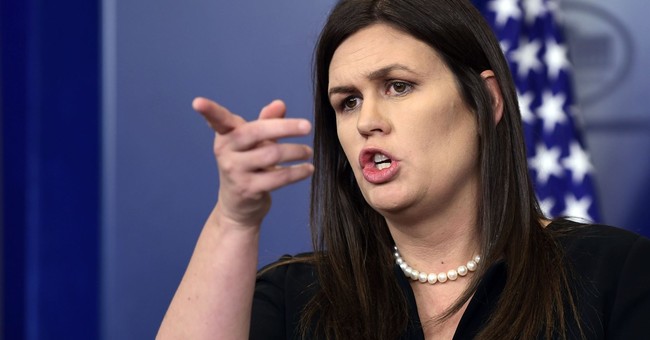 "The president was very clearly referring to MS-13 gangs members who enter the U.S. illegally and whose deportations are hamstrung by our laws," Sanders said. "This is one of the most vicious, and deadly gangs that operates by the motto of 'rape, control and kill.' If the media and liberals want to defend MS-13, they're more than welcome to. Frankly, I don't think the term the president used was strong enough."

"MS-13 has done heinous acts. It took an animal to stab a man 100 times and decapitate him and rip his heart out. It took an animal to beat a woman they were sex trafficking with a bat 28 times, indenting part of her body. And it took an animal to kidnap, drug and rape a 14-year-old Houston girl," she continued. "Frankly, I think that the term animal doesn't go far enough and I think the President should continue to use his platform and everything he can do under the law to stop these types of horrible, horrible, disgusting people."

.@PressSec: "If the media and liberals want to defend MS-13, they're more than welcome to. Frankly, I don't think the term @POTUS used was strong enough... It took an animal to stab a man 100 times and decapitate him and rip his heart out." pic.twitter.com/OP4zt1Ibws

During a roundtable event with local officials fighting sanctuary cities at the White House Wednesday, President Trump referred to MS-13 gang members as animals during an exchange with a sheriff. The media and Democrats accused him of calling all illegal immigrants animals.

After reviewing the context, the Associated Press released a correction late Thursday morning.

"I'm referring and you know I'm referring to the MS-13 gangs that are coming in. I was talking about the MS-13. And if you look a little bit further on in the tape you'll see that. So I'm actually surprised that you're asking this question 'cause most people got it right," Trump said according to the White House pool report. "MS-13, these are animals. We need strong immigration laws. We have laws that are laughed at on immigration. So when the MS-13 comes in, when the other gang members come into our country, I refer to them as animals and guess what, I always will."