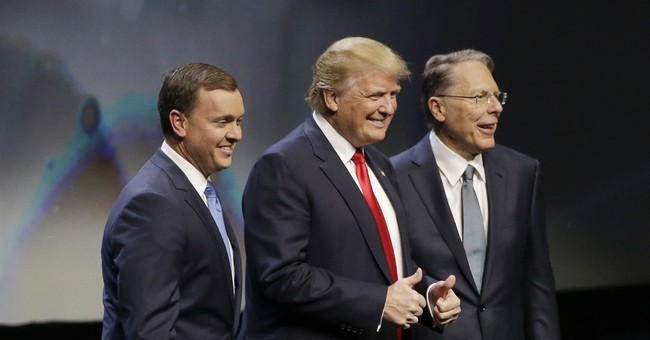 President Trump will speak at the NRA-ILA Leadership Forum and will reportedly be introduced by Vice President Mike Pence.

The NRA made the last minute announcement earlier this week that President Trump would attend the event, which is expected to draw in a crowd of nearly 80,000 throughout the weekend. Texas Govenor Greg Abbott and Senator Ted Cruz will also give remarks at the event.

“I am honored to welcome President Trump and Vice President Mike Pence to the NRA Convention in Dallas this Friday,” Executive Director of NRA-ILA Chris Cox released in a statement. “While I’m sure there will be a meltdown on the Left, we will be unapologetic in our celebration of American Freedom.”

For a rundown on the event, visit here.

Then, someone made a fake website for his wife’s interior design business, altering images of artwork to show photos of child gun-violence victims.

Last week, two gun-control activists protested outside Cox’s Alexandria, Va., home and handed out fliers outside his wife’s nearby business.

“Mr. and Mrs. Cox have been targeted over the past few months by repeated acts of criminal and unlawful conduct, including having their home vandalized on two occasions,” Elizabeth Locke, attorney for the Cox family, said in a statement. “These coordinated tactics have crossed the line of civility and human decency.”