Condoleezza Rice: Relax, If We Pull Out of the Iran Deal It Will Not Be a Disaster 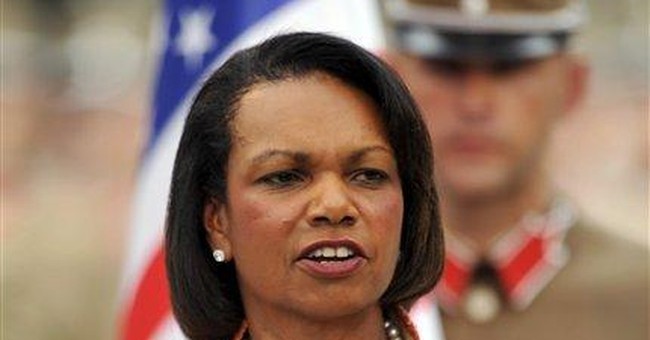 By May 12 President Trump will make a decision about whether to re-certify or nix the Iran nuclear agreement.

European allies are urging the president to work with them on a number of fixes by addressing the sunset clause and targeting Iran's destabilizing behavior in the region. The Israelis, who presented a trove of evidence Monday showing Iran lied about a previous nuclear program they never acknowledged existed, are urging President Trump to "do the right thing" by getting out of the deal.

But former Secretary of State Condoleezza Rice tried to cool the temperature Tuesday morning during an interview on Fox News and said everything will be fine if the United States decides to leave the agreement.

"I actually think if we pull out now, it’s not going to be the disaster that everyone’s talking about," Rice said. "I would not have signed this deal. I don't think it was a good deal and that we were in a hurry to get a deal."

"If we get out of this deal, it will be just fine," she continued.

“I actually think if we pull out [of the Iranian nuclear deal] now, it’s not going to be the disaster that everyone’s talking about.” -@CondoleezzaRice pic.twitter.com/oQUmlFqcRK

Meanwhile, given the intelligence revealed by Israel about Iran's deception, the deal is on life support. The United States has strongly backed the evidence.

Pompeo: "Why exactly was Iran hiding half a ton of nuclear weaponization files while implementing the Iran deal?" pic.twitter.com/sgxp52waUz

Spoke to 4 experts on #Netanyahu & #Iran Presentation:
•@MaloneySuzanne :Underwhelming but speaks to Trump
•@mdubowitz : Ups threshold to fix
•@dassakaye : Deal on Life Support
•@MPPregent : Gives Trump what he needs to Walk away... https://t.co/tlDDICH2bE

Fact or Fiction: January 6 Mob Was Armed to the Teeth and Had AR-15 Rifles
Townhall
Dana Loesch and Mary Katharine Ham go *there* in response to Jane Fonda's latest on guns and abortion
Twitchy
Liz Cheney, Never Trump Go Belly-up While Defending the Hutchinson Testimony
Redstate
Wow, They Really Want to Do This? Delusional Democrats Advance 'Transgender Bill of Rights'
PJ Media