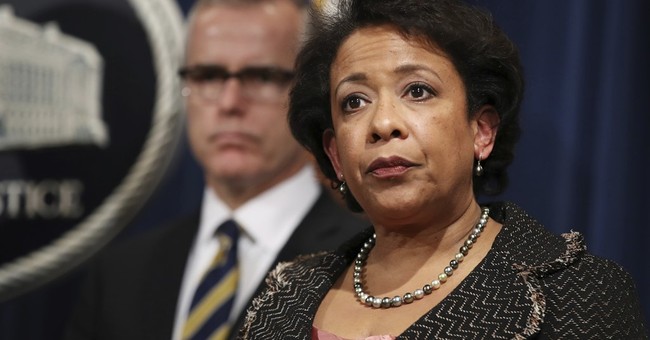 Former FBI Director James Comey will be out with a tell-all book at the end of the month and former Attorney General Loretta Lynch is doing her best to get ahead of the story.

During a wide ranging interview Monday with NBC News, Lynch tripled down on her innocent claims about the secret and infamous tarmac meeting with President Bill Clinton while Hillary Clinton was still under FBI criminal investigation. Just a few days after the meeting, it was announced Clinton would not be prosecuted for repeated mishandling of top secret, classified information.

According to Lynch, it was hot outside in Phoenix on June 29, 2016 and Bill simply wanted to come say hello. She didn't initially question his presence and didn't believe it was a conflict of interest because she often spoke with people in public life.

"It was still 107 degrees outside and I was told that he wanted to come on the plane and say, 'Hello,'" Lynch said. "You know, at first my thought was, 'You know, I speak to people all the time-- people in public life, people not in public life.'"

Lynch then went on to say Clinton didn't just say hello, but that they had an extensive conversation. NBC's Lester Holt didn't follow up by asking what they spoke about, but Lynch has previously claimed the topic of their conversation was purely social and ranged from golf to grandkids.

In an unusual move, FBI agents working the Hillary Clinton e-mail case had to sign a special form reminding them not to blab about the probe to anyone unless called to testify.

Meanwhile, government watchdog Judicial Watch has sued the FBI for documents about the tarmac meeting and has requested the DOJ Inspector General investigate.