EPA Inspector General: No, Scott Pruitt is Not Under Investigation Over His Lease 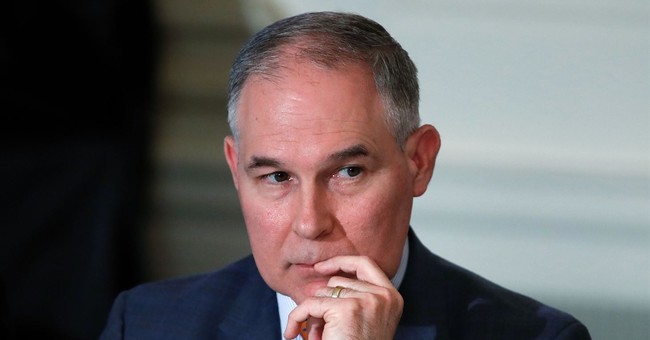 “I can’t speak to the future of Scott Pruitt,” Gidley said. “I can just talk about where we are now...We don’t have any announcements to make as regards to staffing right now."

Pruitt has been under extra fire this week after a series of reports in various media outlets detailed allegations of taxpayer funding abuse, lavish spending, pushing through pay raises for friends after being previously denied by the White House and more. The most prominent accusation and the one getting the most attention is about Pruitt renting a room on Capitol Hill for $50 per night, but only while in town. The bedroom is inside a condo owned by a D.C. lobbyist, who Pruitt insists has no business before the EPA and therefore isn't a conflict of interest. Pruitt addressed all of these issues during an interview with Fox News yesterday.

But according to the EPA Office of the Inspector General, the controversy surrounding the lease hasn't prompted an investigation from the independent agency.

EPA Office of Inspector General says it has NOT announced any investigation into Administrator Scott Pruitt's DC lease.

For what it's worth, the Washingtonian did a search on where someone could stay for $50 a night on Capitol Hill and this is what they found:

Where can you stay on Capitol Hill for what Scott Pruitt paid? We checked Airbnb. https://t.co/h7Shcc6A1b pic.twitter.com/JDXn1Yr7Wi