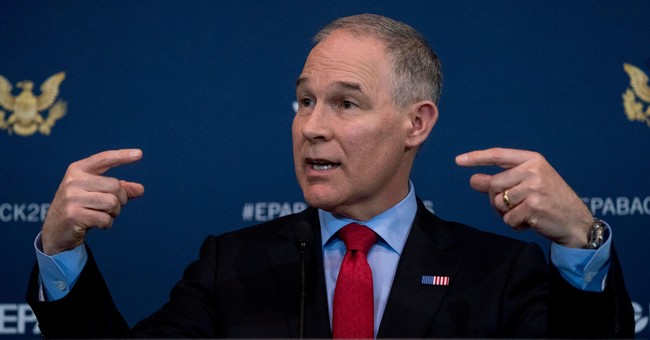 Where does EPA Administrator Scott Pruitt stand in the Trump administration? With rumors that he violated ethics rules by petitioning the White House for pay raises for two of his employees and having a cushy deal on a Capitol Hill condo, some reports suggest he has one foot out the door. But, President Trump called him the other day to assure him he has his back and voiced confidence in him.

“I can’t speak to the future of Scott Pruitt,” Gidley said. “I can just talk about where we are now. The White House is aware of these reports. We’re looking into those. We don’t have any announcements to make as regards to staffing right now, but we’re aware and we believe some of these questions need to be answered.”

The president expects the “highest level of ethics” from all his cabinet members, Gidley added.

What's more, CNN reported Thursday that Trump was "not pleased" by Pruitt's "combative" interview with Fox News's Ed Henry, which aired Wednesday night. In that interview, Pruitt insisted he did not learn about the unethical pay raises until yesterday. Once he got wind of it, he stopped it.

Conservatives in Congress want him to stay. Sen. Rand Paul (R-KY) says it's a necessity.

Sen. Ted Cruz (R-TX) also asked Trump to stick by his instincts and keep Pruitt by his side.

This is compelling. Why do Obama and his media cronies want so badly to drive @EPAScottPruitt out of office? @realDonaldTrump is too cagey to be duped and bullied by the Obama groupies. https://t.co/USHqDUDECH

Pruitt has surmised the same thing about a liberal effort to oust him, chalking it up to his efforts in cutting back on environmental regulations. The problem, as noted by Fox News's Ed Henry, is that a few Republicans have called for his resignation too.